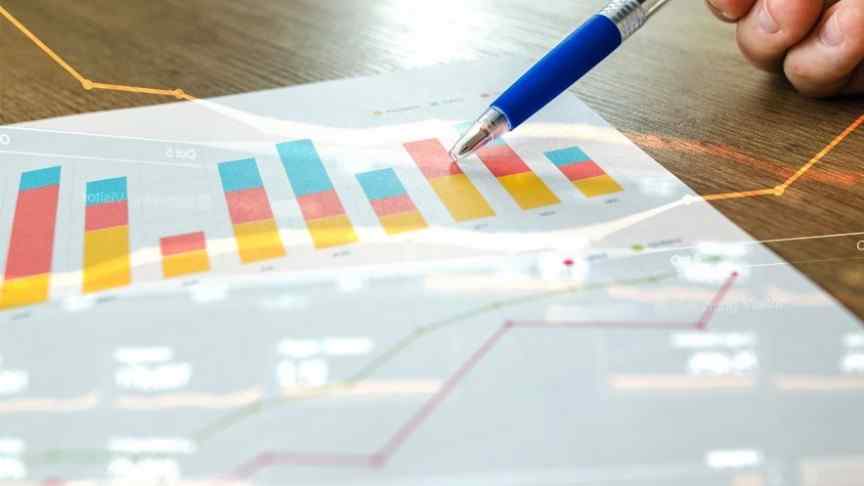 Litecoin has been confirmed for the Gemini exchange with a launch date of October 13th. The crypto market is waiting for Bitcoin's next move.

Gemini, a New York-based cryptocurrency trading exchange, has confirmed that LTC will soon trade on the platform. Responding to a tweet they said,

We hear you! LTC is on its way, we’ve already received regulatory approval to list, and we will be sure to let everyone know once it’s available for trading. 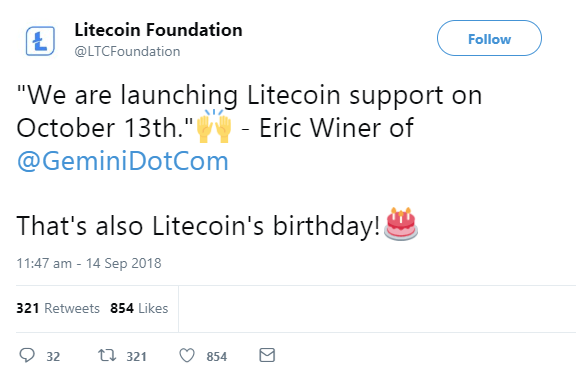 The Gemini exchange is owned by the Winklevoss twins of Facebook lawsuit fame, who have since gravitated to cryptocurrency and recently had a proposal for a Bitcoin ETF turned down by the Securities and Exchange Commission (SEC). Gemini also recently launched the Gemini dollar (GUSD), which is the world’s first regulated stablecoin.

Cameron Winklevoss commented on the coin through a Medium post stating that the stablecoin would be,

strictly pegged 1:1 to the U.S. dollar, and built on the Ethereum network according to the ERC20 standard for tokens. 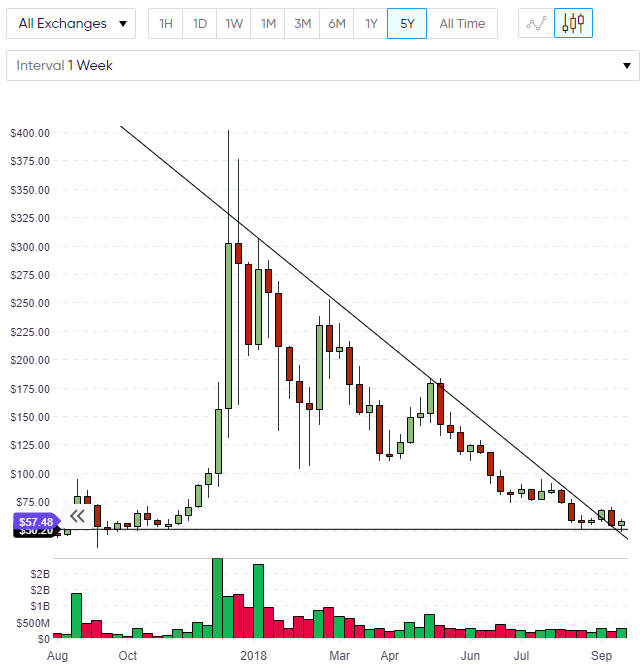 Litecoin is still setting up a potential bottom at the $50.00 level. A further rally this week would improve the chances of a bottom and the break of the downtrend line could signal that this is happening. The $80.00 level would stand in the way of another test of the $100.00 level. 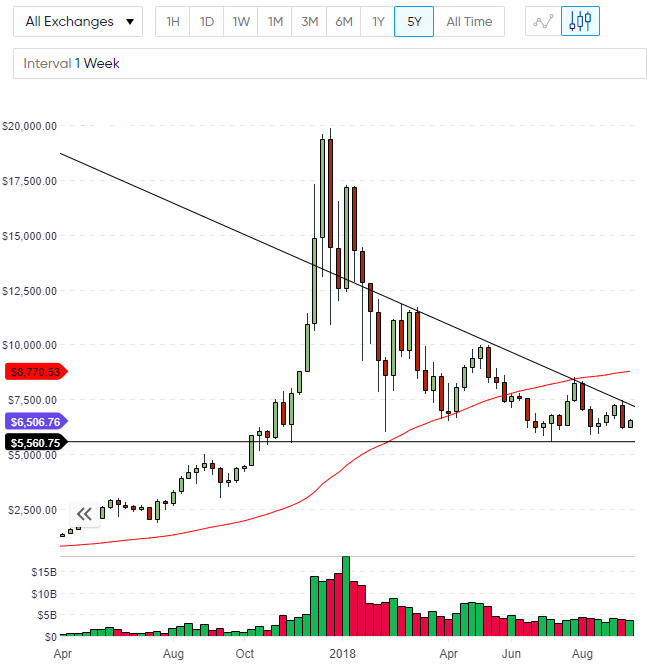 The weekly chart for Bitcoin highlights the importance of the current levels for the overall market. Bitcoin’s bearish week last week has set up the risk of a further move to test the $6,000 level, so we will need to see a rally to improve the near-term outlook. For Bitcoin, that rally simply needs to close higher than $6,500, but the weekly chart highlights that the key level is a close near $7,500, which would need some sort of catalyst or volume spike.

Price is still contained in a downward channel from early-2018 and the failure of the July rally has set up the path for Bitcoin with the $6,000 level being crucial support and the channel resistance near $7,500 providing a breakout target. BTC still trades under the 50-period moving average on the weekly and the next test of that will likely be followed by a move to $10,000. Bitcoin still represents 55% of the entire cryptocurrency market value and the general market will continue to follow its lead.

Further news on institutional trading showed that Morgan Stanley was moving into derivatives trading with “swap trading” on Bitcoin. The contracts are still in the internal approval stage, however, this will add another layer of maturity to the crypto market. Swaps are the largest trading instrument on the foreign exchange market with $2.4 trillion of daily turnover as of April 2016 (Source: BIS). 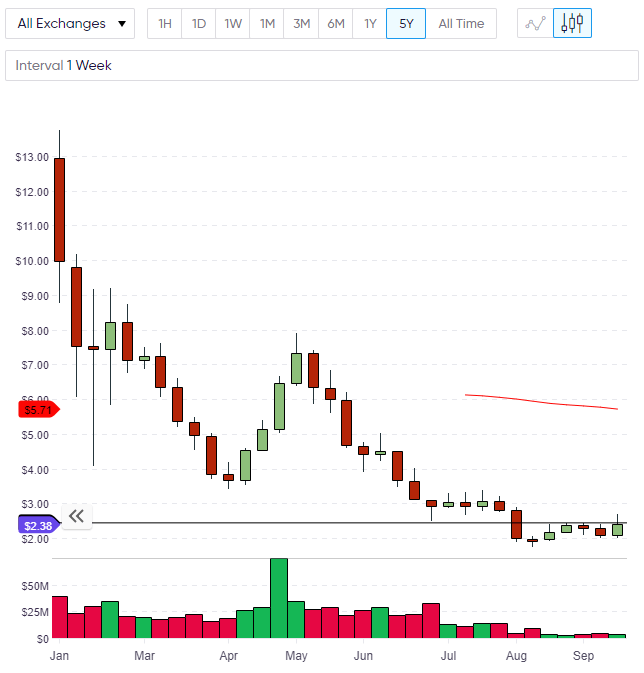 The price of WAVES is at an important crossroads with the weekly chart highlighting a test of key resistance with the recent rally. The $2.40 level has provided some stubbornness but there are still three trading days to take this level and set Waves up for further gains. The $3.00 mark is the next level of resistance before a potential move towards $7-8.00 becomes possible.

The Waves team has recently been in talks with the Maltese government over implementation of the currency in the island state. Malta has been very progressive in its attitude towards cryptocurrency and it is often referred to as “Blockchain Island” due to its welcoming attitude to cryptocurrency adoption.

We are interested in this accreditation and are ready to start working with Malta’s legal experts to bring our ready-to-use blockchain solutions here: Waves for the financial sector and Vostok for the government and corporate sectors.

The adoption of Waves in Malta could be an interesting development for the coin and could also serve as a test case for other small nations. For Malta, the opportunity is there to become a leader in crypto adoption. 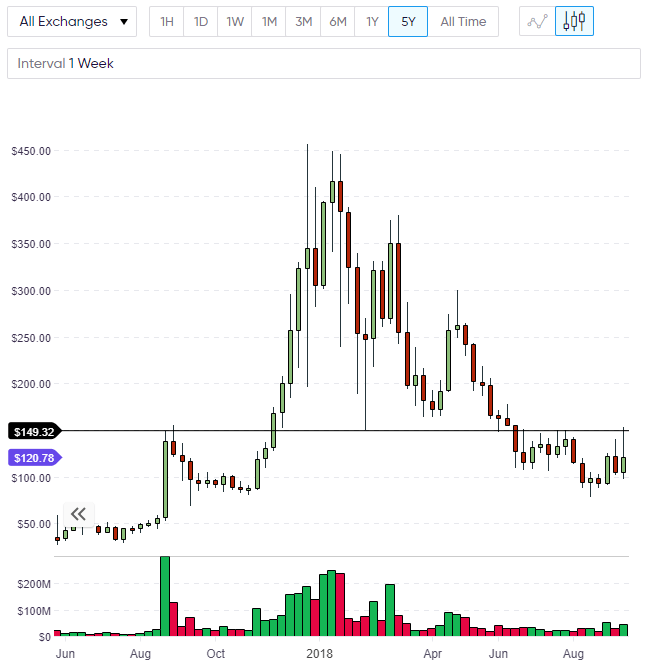 The price of Monero was up 8% in the last 24 hours but the weekly chart shows that the resistance near $150 has proven stubborn. A failure to breach this level by the end of the weekend could be bearish for Monero. The next few days are important for the next path forward. We could still see a further rally to close above the resistance, however, a rally that closes just shy of this level would maybe be enough to create the foundation for a further advance next week. Above the $150 level would be a chance for Monero to push towards the $200 and $250 levels and it’s likely that the end of week price action in Bitcoin will dictate the market and the strength of coins like Monero.