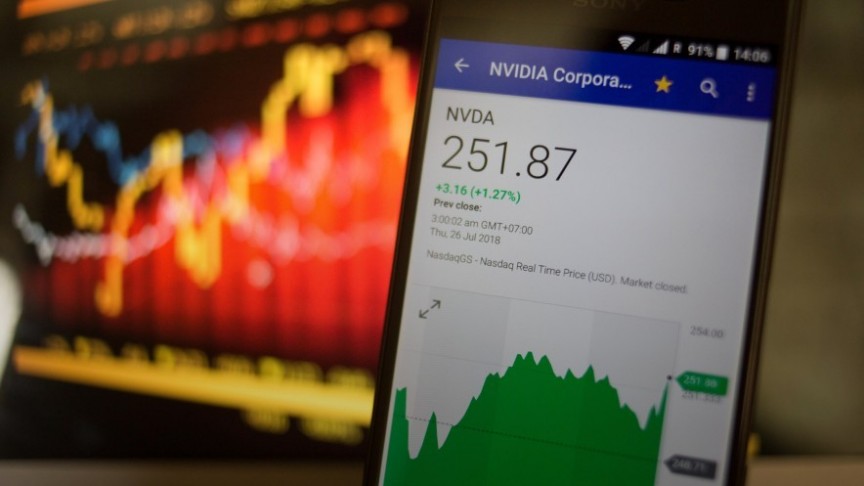 After declaring in the Q2 report that GPU sales for crypto mining fell short of forecasts by 82%, Nvidia’s stock slumped.

Nvidia CFO Colette Kress announced the company’s Q2 earnings on Thursday. Although their GPU business revenue was up 40% from the previous year due to record performance in the gaming, professional visualization, and datacenter sectors, the chip-making giant declared a substantial decline in sales for its crypto mining GPUs, falling well short of Wall Street forecasts. This development caused Nvidia’s shares to drop by as much as 6.4% in extended trading shortly thereafter. Kress said,

Our revenue outlook had anticipated cryptocurrency-specific products declining to approximately $100 million, while actual crypto-specific product revenue was $18 million. Whereas we had previously anticipated cryptocurrency to be meaningful for the year, we are now projecting no contributions going forward. We are including no contribution from crypto in our revenue outlook.

Nvidia has profited immensely from the crypto mining gold rush over the past 12 months, seeing GPU demand rise astronomically. This prompted a very pro-crypto mining outlook within the top brass of the company. Their Q1 crypto-mining GPU sales amounted to $289 million. The company needed to ramp up its production in the early months of this year as it was unable to meet the demand of both crypto miners and gamers, much to the chagrin of the latter. Their rivals AMD also enjoyed the same boom period but maintained a more cautious attitude and did not get carried away with the lift provided by sales to crypto miners. Ethereum mining hardware, reportedly worth about 10% of AMD’s quarterly revenue, was the biggest selling point for those who sought to mine as a hobby or for profit.

Crypto Mining in a Bear Market

This decrease in demand for crypto mining hardware is indicative of the larger crypto bear run that has spanned this entire year. At the peak of the December 2017 bull run, plenty of profits were to be made from mining. Unfortunately, the story has taken a turn for the worst. With Bitmain’s recent ASICs release for mining Ether, profitability has decreased to an all-time low. The power of ASIC ether mining devices renders current graphics cards provided by the likes of AMD and Nvidia pretty much useless for mining purposes because they can't compete with the processing power of monsters like Bitmain. This causes a decline in amateur/casual Ether miners who use graphics cards manufactured by Nvidia.

Nvidia’s strategic response to the decline in demand for crypto mining GPUs has been to shift their attention away from those demographics and shift focus back to their core targets and products. While this might be good news for gamers, it may have a negative ripple effect on the crypto community. Fewer Ethereum miners seceding to giants like Bitmain will make the cryptocurrency less decentralized and more like the very centralized financial platforms it was meant to replace. This would severely weaken faith in the currency and, owing to its status of being the 2nd largest cryptocurrency by market cap, ultimately in cryptocurrencies as a whole. For security reasons as well as in the interest of decentralization, cryptocurrencies benefit from having the highest possible number of miners. The example of Bitcoin mining being monopolized by Bitmain is an indication of how highly specialized tools like ASICs can skew the mining community in favor of big investors.

As for the crypto mining community, this news could well be a blessing in disguise since it will pull down the price of GPU mining equipment. After struggling with obscenely high GPU prices for a year, miners can now breathe a sigh of relief after seeing prices drop to below normal. At the current crypto market prices, GPU miners could take years to break even. Buying Ether right now would be a more profitable investment than spending that same money on electricity for mining purposes. However, the bear market will someday (presumably) turn around and prices will rise making mining profitable again. This means right now there could be a great opportunity to buy mining equipment cheap. Although some projects are struggling to deal with ASICs, there are others that have taken steps to make their algorithms ASIC-resistant and GPU friendly. The days of big profits might be gone, but the crypto mining market is still young enough for the likes of Nvidia and AMD to reestablish a foothold in the industry and challenge Bitmain’s monopoly.