Bitcoin is flat on the week as XRP and ETH swap places again. REP doubles as it releases its Veil platform with crypto betting options.

Bitcoin has produced another flat week with a 7-day return of -0.55%. We are still in the process of building a potential base for another rally with the rectangle showing the key area of support and resistance, which will define the next path for the general cryptocurrency market. $4,250 would be the start of a revival in BTC.

The overall market has followed BTC with Binance Coin’s 12% gain being the highlight of a slow week for the top 20 coins. Ethereum has once again surrendered second spot in the cryptocurrency market to Ripple’s XRP after the Constantinople hard-fork was pushed out to February.

In stock markets, the U.S. S&P500 has rallied back into its own support zone but as it approaches the 50-day moving average there is still a possibility that the lows will be retested in the weeks ahead. There is still much to be concerned about with the U.S. government shutdown stretching into its 31st day and the threat of a “No Deal” Brexit hanging over Europe. The blue line on the left of the chart highlights the date of President Trump's election win.

The U.S. government shutdown has actually affected the cryptocurrency market as the S.E.C. were unable to grant approvals for Bakkt’s futures offering before December 22nd and the approval of ETF applications has been left hanging in the balance. There is still the potential for crypto to become a safe haven from an economic storm as it has done in the past with smaller problems such as those in Cyprus and Turkey.

Augur's REP token has seen a strong seven days with a jump of 102% on the week. The prediction market project has just launched a new “Veil” platform in attempts to take the network to the masses.

The Augur blog commented on the release:

We foresee a not-so-distant future where millions of people create and trade in millions of markets. And we’re thrilled to finally launch Veil on Mainnet and bring that future just a little closer.

One of the potential uses for Veil is the ability to trade 5x leveraged positions in cryptocurrencies. The products are structured as 7-day Augur scalar markets that are settled in ETH.

An example of the predictions market is the opportunity to predict the BTC price at a given time. For instance:

These products are similar to binary bets and other prediction markets on financial markets that are provided by spread betting firms and it’s possible that new volumes could be attracted to REP in order to take advantage of multi-dimensional crypto bets.

Looking at the price of REP, there is a strong chance of a medium-to-long-term bottom as the market has advanced beyond the previous support levels near $16.50. The larger resistance levels are seen near $50.00 and that would be the target for REP.

Another interesting development on the week is the ability to link Paypal accounts to Coinbase. This is done within the platform settings and allows for the withdrawal of fiat currency assets from the Coinbase platform. Using Paypal as a fiat on-ramp will also likely be possible in the near future and is another sign of maturing payment systems for the coin and token markets. 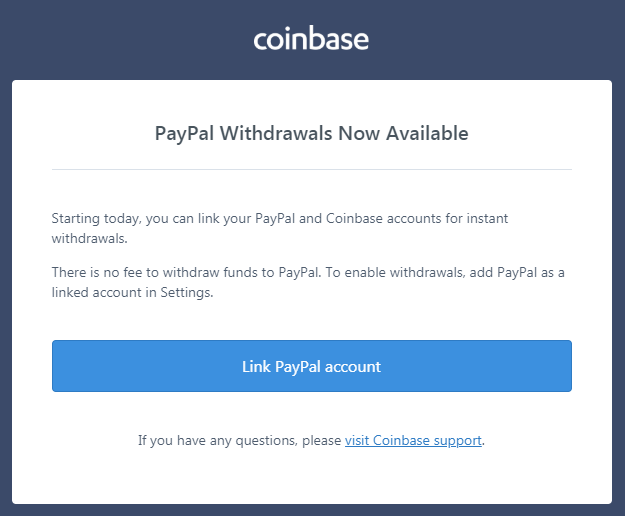 The Coinbase blog also summarized the company’s notable achievements in Q4. The company also pushed ahead with the acquisition of new talent and ideas by snapping up the San Francisco-based startup Blockspring, which enables developers to collect and process data from APIs.

We are now moving through Q1 which was previously marked as a potential timeline for institutional investors to arrive in the markets. Although we have seen some volumes in the OTC market, there is yet to be substantial follow-through in the exchanges.

Now, you have Yale investing. The Yale endowment. This has put everybody on notice at least in the institutional area. You either have to have a strategy for investing in this, or you have to have a reason why you’re not. So I would expect over the next three months, six months, you start to see the proverbial herd really start to turn in this direction. And I can just tell you from the conversations we’ve had for our crypto hedge fund, that herd is starting to enter this market.

Kelly also noted the arrival of custody solutions as being a game changer and these developments are still in play and at the time, new retail opportunities were also mentioned with Schwab and ETrade being noted as companies that could already be working on crypto solutions for retail investors which could be introduced as soon as Q1 2019. The onboarding of institutions by the likes of Fidelity would also fit that story and it’s possible that big money is building positions ahead of favorable regulations and retail solutions for the masses.

For the weeks ahead, keep an eye on Bitcoin’s support and resistance levels.