Bitcoin Shrugs off the Bears as EOS Rallies, TRX and XLM Aug. 27 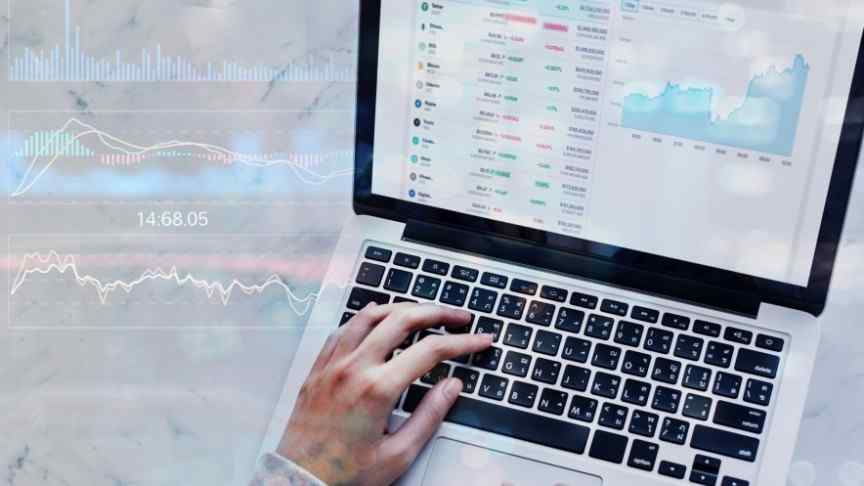 Bitcoin Shrugs off the Bears as EOS Rallies, TRX and XLM Aug. 27

Bitcoin has shrugged off the latest ETF rejections by the SEC to close 4% higher on the week. EOS rallied overnight with a large $1 million buy.

The price of Bitcoin saw another positive week with a close near 4% higher at the $6,700 level. Despite the disappointing SEC’ rejection of a Bitcoin ETF from three firms, the statement that the decision will be reviewed has likely provided some support until the matter is closed.

The SEC rules state that in the event of a review they can, “affirm, reverse, modify, set aside or remand for further proceedings, in whole or in part”.

It’s maybe unlikely that they will overturn the decision as the Winklevoss’ ETF also underwent a review process which lasted a year but it’s possible that the SEC are buying some time to see how Bitcoin and its peers perform in the next months. They have made their concerns about manipulation etc. very clear to the providers so there is an opportunity to make some adjustments and convince the SEC that the time is right for a listed Bitcoin retail product. 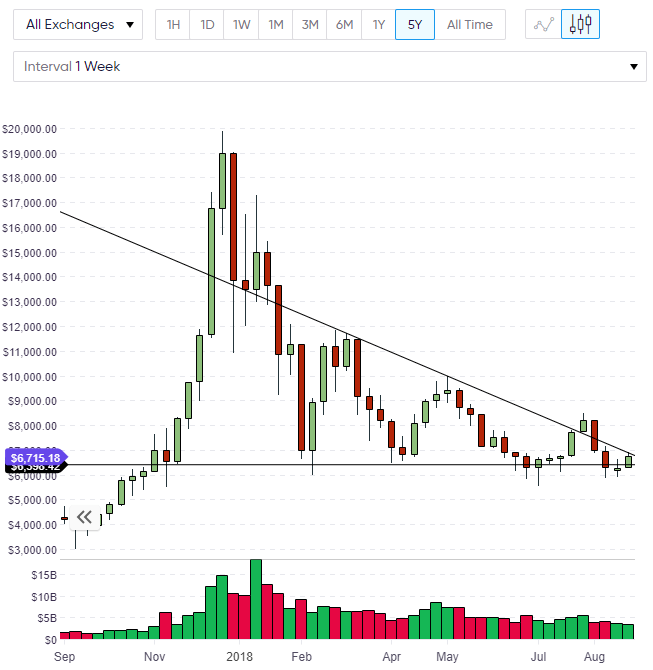 Bitcoin is outperforming some of its rival coins once again and the close at $6,700 sets up for further gains with the $8,500 level still being the first obstacle on the path to retake $10,000. I have marked a key level for this week at $6,400. This is the monthly support level and it’s vital that we hold this on the week to keep the monthly chart looking positive. The downward channel line is our first resistance for this week and a weekly close above $7,000 would set up a test of the $8,500 level again.

EOS is stronger on Monday after large interest overnight in the fifth-largest coin by market cap. The price of EOS currently trades at $5.17 and an order to buy $1 million of EOS was spotted by traders overnight. 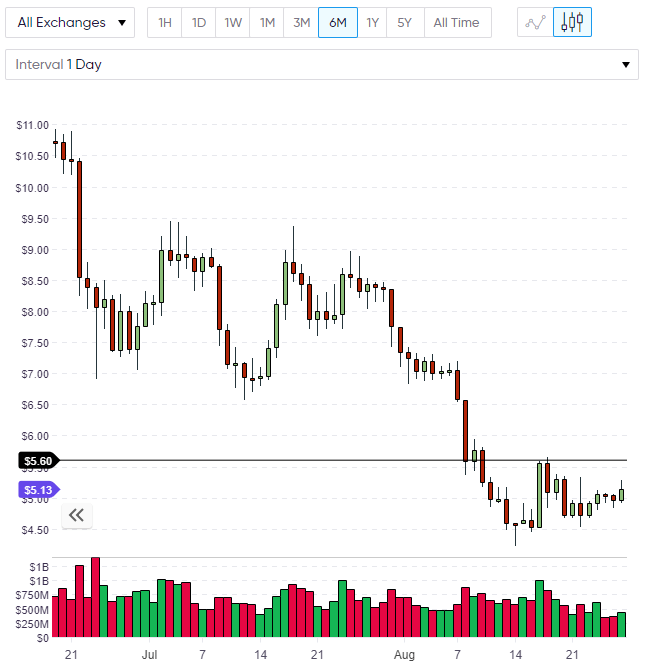 I noted in a previous article that the moving average around $7.20 on the weekly level would be the target for a rally. Resistance for this week comes in at $5.30 and a close above here would set up EOS for further gains. EOS is holding onto the number five spot in the list of the largest coins, however, the market cap is half of Bitcoin Cash and Stellar is closing in with a value only $500 million less so it’s important for EOS to rally if it wants to hold that position. 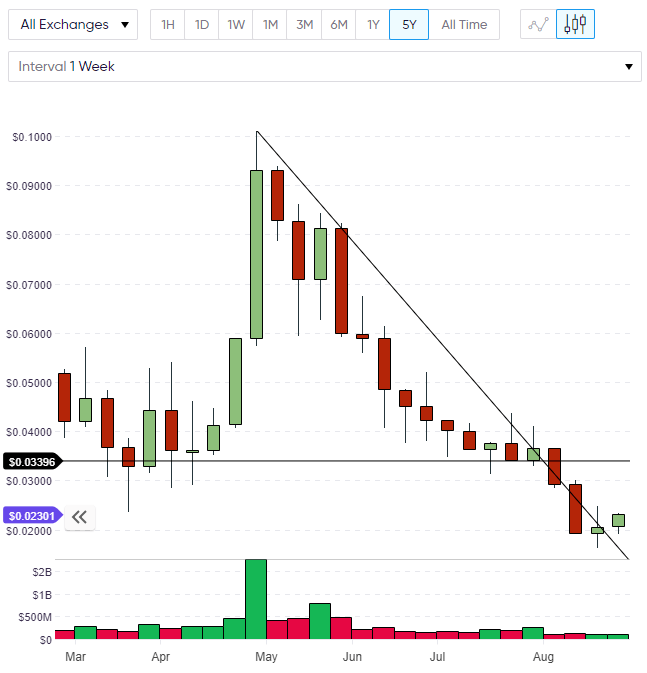 Tron is another coin that has stabilized in recent weeks. A doji bar two weeks ago was followed by a positive close for last week and despite the volume being low, it’s possible that TRX can push further. The next target for TRX comes in around the $0.0300 level and a close above there in upcoming weeks would set TRX up for a test of the $0.400 level. There is little resistance above $0.400 and it’s very possible that the decline is over for Tron.

Tron’s Founder, Justin Sun, recently took to Twitter to share the news that TRX has now expanded its reach to 2.2 million businesses with the CoinPayments integration. CoinPayments is a payment gateway for the use of cryptocurrencies and offers plugins for e-commerce carts such as Shopify. 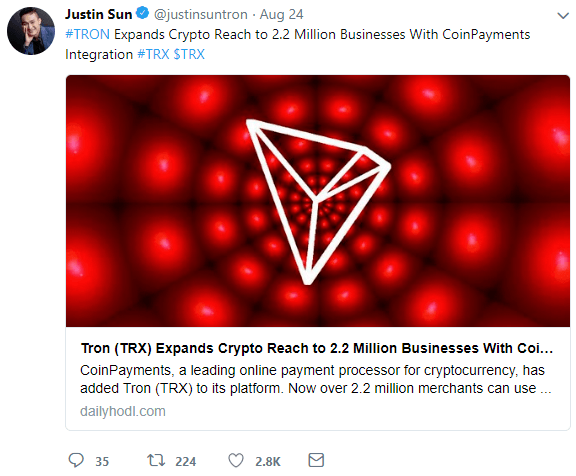 Tron has also seen a surge in usage through a new platform which allows transactions of TRX through Twitter and Telegram. More than 11.6 million TRX changed hands through the Seedit platform. I noted in previous articles that Justin Sun had also commented on a meeting between Twitter and Tron executives so it may have been linked to Seedit, which is a peer-to-peer lending platform, and developments such as these hint at the type of mass adoption that could occur with a coin such as Tron. Online retailers could offer checkout options in multiple coins and consumers could take advantage of market fluctuations to seek cheaper goods, giving them more power over their money.

As platforms such as Seedit would also allow the option to side step traditional lenders and the high fees of payday lenders, then you start to see why traditional financiers, such as Jamie Dimon of JP Morgan, hate cryptocurrencies so much. 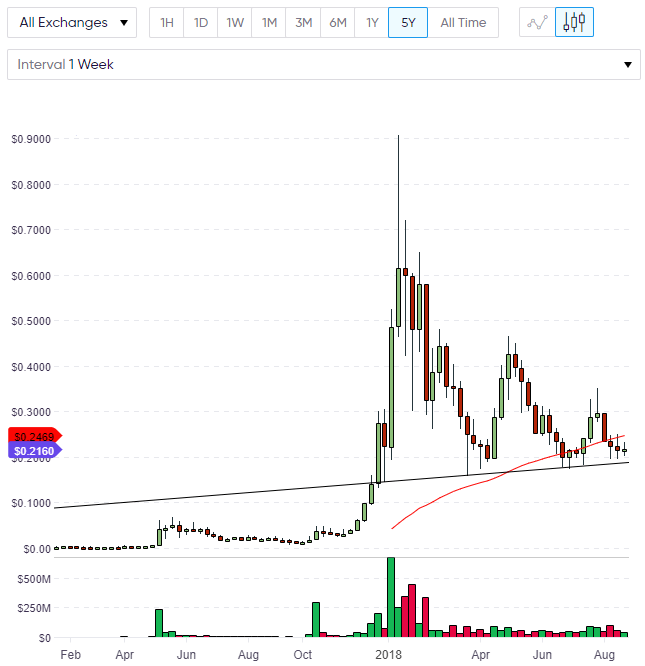 The price of Lumens was fairly muted last week and is worryingly holding below the 50 moving average. We are still holding above the uptrend line for the year and may test that, yet the price needs to shake off the bearish tone and put in a rally if it is to mount a challenge for the number five spot held by EOS.

The first resistance for XLM is the moving average at $0.25 the support is at the trendline just below $0.200. That level has provided three rallies this year so if we see buyers emerge then it may be the last time we trade this low in the medium term.