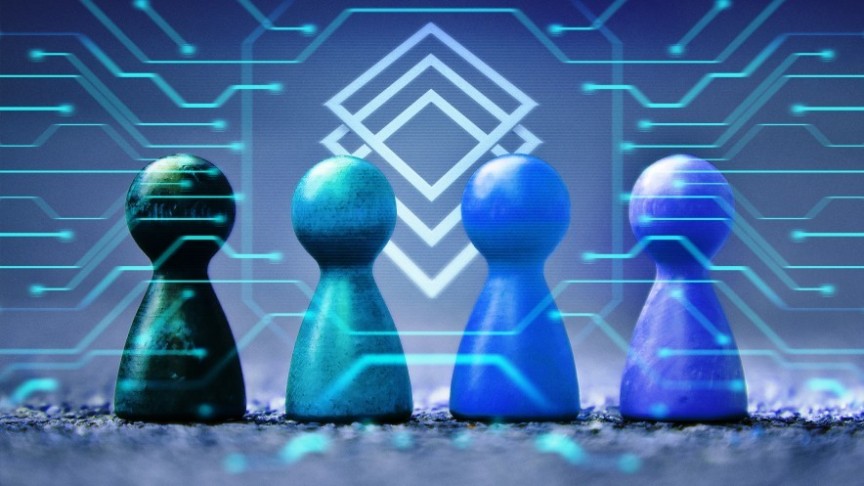 This final article dives into the workings of the DAOstack platform, looks at some exciting pilots, and finally introduces the team behind it all

The platform includes a modular smart contract framework, a friendly JavaScript developer environment, and an intuitive user interface allowing anyone to participate in a decentralized organization without technical knowledge.

The DAOstack architecture is composed of the following four layers on top of Ethereum: 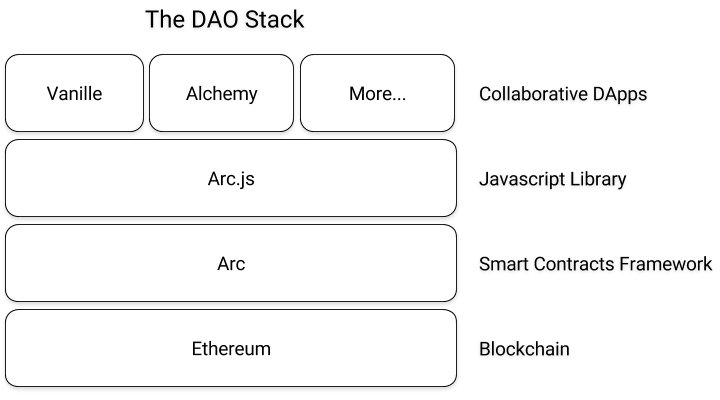 Arc is a library of Solidity smart contracts forming the DAOstack base layer. It contains modules that can be combined and matched to create a wide variety of governance protocols for any kind of DAO.

DAOs are, at the technical level, made of a series of smart contracts that are deployed through Arc. The Arc framework allows for the creation, configuration, deployment and operation of DAOs on the Ethereum blockchain (possibly relying on IPFS as an overlay for data storage and retrieval).

With an open library of governance modules and templates, Arc is like a Wordpress for DAOs that contains the basic building blocks and standard components that can be used to implement any DAO.

Arc is like a Wordpress for DAOs that contains the basic building blocks and standard components that can be used to implement any DAO.

Most importantly, Arc implements game theoretic and economic techniques (such as: monetization of attention, staking on proposal results, etc.) that ensure high resilience (i.e., resistance to a disproportionate decision power in the hands of the few) and bandwidth (decision making rate of the organization), providing a universal framework for the building of any DAO imaginable.

Arc is also not limited to a specific set of governance systems but is intended to evolve along the way in accordance with the needs of users, making it easy for third parties to create and combine their own elements, specifying the rules for the issuance, management and assignment of scarce resources, including transferable (e.g. tokens) and non-transferable assets (e.g. reputation).

The Arc documentation can be found here.

Arc.js allows any organization or industry to create their own custom interface that can be used, deployed and accessed almost anywhere.

Front-end applications rely on Arc.js, a JavaScript library that operates the Arc Solidity framework via Web3.js. It is designed to make it easy for front-end JavaScript developers to create collaborative applications on top of Arc without the need to interact directly with Solidity code or the Ethereum blockchain.

Arc.js forms a friendly API layer and a library that facilitates Javascript application access to the DAOstack Arc Ethereum smart contracts, bridging Solidity (the blockchain) and Javascript (the browser) so that front-end developers can easily integrate their apps to the stack.

Arc.js allows any organization or industry to create their own custom interface that can be used, deployed and accessed almost anywhere.

The Arc.js documentation can be found here.

ArcHives is a set of shared public registries, curated by the DAOstack community and serving its global ecosystem. It is where the ecosystem of collaborative DApps (built on top of the stack) and network effects build up and enhance interoperability.

If Arc is the ground operating layer, ArcHives are its shared records of curated databases that provide a central locus for data integrity and quality. This shared set of registries help with the communication of DAOs and DApps utilizing Arc and Arc.js.

If Arc is the ground operating layer, ArcHives are its shared records of curated databases that provide a central locus for data integrity and quality.

Alchemy is DAOstack's native user interface and front-end, and the very first application developed for DAOstack designed for the budgeting and resource allocation for decentralized organizations. Alchemy also allows anyone to create and deploy their own DAO/agency, invite individuals to participate, and even create associated tokens if so desired.

Alchemy is the first, but one among many interoperable collaborative applications featuring an intuitive and easy-to-use in-browser interface.

Vanille is another web frontend built on Arc.js (wrapped Arc contracts) providing a GUI dashboard for easily creating, building and interacting with DAOs.

Alchemy interface can be accessed at alchemy.daostack.io (with MetaMask on) and Vanille's latest live release is running at daostack.azurewebsites.net.

The components of the Arc framework and Alchemy's front-end application are already deployed and live on the Ethereum mainnet with proposals being submitted and the first DApps starting to be built on top of DAOstack.

Of the various upcoming DAOstack pilots, Plantoid is particularly curious. It is an autonomous, blockchain-based lifeform that is the creation of Primavera de Filippi, a DAOstack team member and a researcher at the National Center of Scientific Research in Paris.

The Plantoid is a synthetic organism designed to simulate a plant. It collects resources (in this case, cryptocurrency) and is capable of reproducing itself by opening a call for proposals on how to create the next version of itself once it has collected enough funds.

The latest Plantoid's offsprings have incorporated the DAOstack governance protocol (the "genesis protocol"). Funders can vote on proposals using DAOstack’s decision-making engine, after which the Plantoid will hire the author of the selected proposal to produce a new replica of itself.

Genesis Alpha is the first pilot to be deployed with the DAOstack. It is currently piloting Alchemy, the application developed for DAOstack for the budgeting and resource allocation for decentralized organizations.

Genesis DAO will manage a community incubator fund to help build the DAOstack ecosystem and collaborative economy. As of now, it is managing a small initial fund through the collective intelligence of about 40 DAOstack staff and community members.

Genesis Alpha is reported live and has passed its first proposal that will contribute funds to an upcoming publication from Enspiral, a global group of freelancers, artists, and social activists devoted to collectively building social ventures.

Anthony Cabraal, Editor of Enspiral Tales, explains that the book will include essays, reflections, and guides from a variety of perspectives on

growing leadership, community without hierarchy, collaborative finance, shared decision making and how we built a culture of peer support and self-development in service of designing livelihoods around positive impact and purpose.

DAOstack is based in Israel, a well-established tech hub and incubator of successful startups, also considered the capital of cybersecurity research.

The country’s unique experience with fintech, cybersecurity and cryptography, has positioned Israel as a hotspot for blockchain and DLT innovation. Israel also has the highest concentration of technical companies outside of Silicon Valley and the highest number of NASDAQ-listed tech companies (after the U.S. and China), with Israel's tech industry accounting for more than 15% of the country's GDP. Notably, the Israeli Knesset recently legislated a set of regulations regarding digital and crypto assets that has been said to "trailblaze a course that other regulators are likely to follow."

Israel is also well known for its efforts and experiments in community building and sustainable development. DAOstack founder and CEO, Matan Field, previously founded Backfeed (which consequently became DAOstack), which he described as being

similar to an Israeli kibbutz where members split the profits based on the contribution, each one makes as perceived by their network in real-time.

DAOstack stands out with strong academic fundamentals. Matan Field is a theoretical physicist at Israel's Technion (home to prominent researchers in the crypto arena) and a leading expert in decentralized governance. Adam Levi, DAOstack's CTO also holds a Ph.D. in physics and is a former IDF radar engineer with over two decades of experience writing code.

Among DAOstack partners are Gnosis, a prediction market platform on Ethereum that joined as lead-investor in DAOStack's seed fundraising and whose co-founder and CEO, Martin Köppelmann, is one of the project's advisors. Gnosis has recently announced a further partnership using DAOstack as the basis of a decentralized exchange for ERC-20 tokens based on the Dutch auction principle. DAOstack's Genesis DAO will launch as public pilot later in 2018 followed by the Gnosis DAO and five other yet unannounced pilots.

Among the project advisors is also Jordan Greenhall, co-founder and CEO of DivX and one of the leaders of the Deep Code movement. Greenhall is among the people who have been particularly influenced by contemporary French philosophy and the works of Gilles Deleuze in particular, in conjunction with his interests in artificial intelligence and complex systems since the early 90s.

Sapien, another DAOstack partner, is a decentralized Web 3 social news platform with a mission of countering fake news and rewarding content creators that will utilize DAOstack to serve as its content curation engine, providing systems for voting on content, managing reputation and defining and enforcing standards.

To stay up to date on the project and pilot DAOs, I recommend following the public DAOstack forum. An insightful TED talk by Matan Field, "Blockchain and the new paradigm of collectivity", and an interesting read by Omar Hijazi, "What Would Aristotle Do with Blockchain Technology?", are both recommended for those of you who are interested in learning more.

This concludes the DAOstack Articles series. To recall, in part 1 we delved into the theoretical and academic roots of the platform; in part 2 we looked at what an operating system for collective intelligence is, the GEN token, and the function of holographic consensus; and in this third and final part we looked at the workings of the DAOstack, promising pilots and the team behind it all.