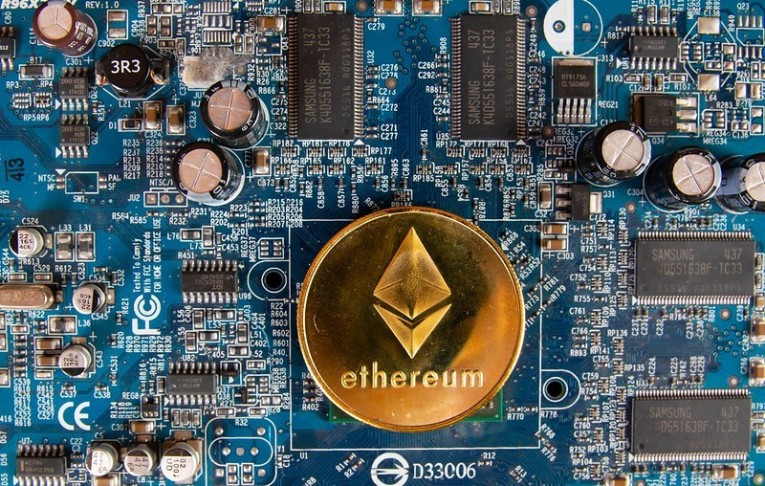 ETH loses 5.5% as rate hikes hurt crypto. BNB pressured due to auditor retreat. XDC is a rare gainer this week. USDD inches back to peg.

Ethereum was 5.5% weaker as the cryptocurrency market struggled with another round of interest rate hikes. The European Central Bank and Bank of England followed the U.S. Federal Reserve with another rate hike to tackle inflation, which hurts non-yielding assets and alternative investments.

Stock markets were also lower and the asset management giant, Blackrock, suggested worse was to come for markets.

"Recession is foretold as central banks race to try to tame inflation. It's the opposite of past recessions," strategists wrote in a 2023 global outlook report. "Central bankers won't ride to the rescue when growth slows in this new regime, contrary to what investors have come to expect. Equity valuations don't yet reflect the damage ahead."

We don't think equities are fully priced for recession. Corporate earnings expectations have yet to fully reflect even a modest recession. This keeps us tactically underweight developed market equities.

The cryptocurrency market is still feeling the weight of negative sentiment around the FTX collapse, however, investment bank Goldman Sachs said that more investors are interested in working with them after the exchange’s bankruptcy.

"It's definitely set the market back in terms of sentiment, there's absolutely no doubt of that," head of digital assets, Mathew McDermott said. "FTX was a poster child in many parts of the ecosystem. But to reiterate, the underlying technology continues to perform."

What's increased is the number of financial institutions wanting to trade with us. I suspect a number of them traded with FTX, but I can't say that with cast iron certainty.

There was further pressure on Binance Coin this week with a 11% drop in the price of BNB.

After rising from the FTX collapse more strongly, the Binance exchange was then caught in the crosshairs of a Department of Justice investigation and questions over its reserves.

Binance, the world’s largest exchange by volume is caught up in controversy with its auditor, global accounting firm Mazars, which is halting its services for crypto clients. Mazars’ list of crypto clients also included exchanges KuCoin and Crypto.com. The accounting giant has suspended all services for these exchanges, including proof-of-reserve reports.

We embrace additional transparency and we are looking into how best to provide those details in the coming months.

Following the collapse of the FTX exchange, Binance published a proof-of-reserves report created by Mazars. However, instead of reassuring investors, it raised several questions about the exchange’s solvency, collateral, and accounting controls. Armanino, another audit firm, also ended its crypto practice and dropped clients such as OKX and Gate.io. The firm had been an auditor for the now-defunct FTX exchange.

The price of BNB slumped last week to a price of $220 on the accounting issues but has since bounced to the $247 level.

The XDC token of the XinFin network was one of the rare gainers this week with a 20% rally.

XDC has been boosted by news that Hummingbot, a California-based DeFi market-making software platform, had launched a 12-week liquidity mining campaign for the project on Gate.io and KuCoin. The move could attract new liquidity to the XDC network.

That followed the recent news that the project had secured a $50 million investment from LDA Capital to build its ecosystem further. The funds will help to develop Layer 2 projects across the XDC Ecosystem and to enhance network adoption and utility.

XDC has seen a big increase in the number of projects launched on its blockchain with DEXs, Metaverses, NFT marketplaces, decentralized email providers and cloud storage, and payment dApps.

Tron’s USDD stablecoin managed to shrug off the previous week’s bearish sentiment as the peg to the U.S. dollar looks to be repaired. The stablecoin had fallen to its lowest since June 22 last week but is starting to recover, alleviating investors’ fears.

USDD is expected to trade at a 1:1 exchange rate with the U.S. dollar but was hurt by the FTX collapse as many feared it could become the next Terra UST. 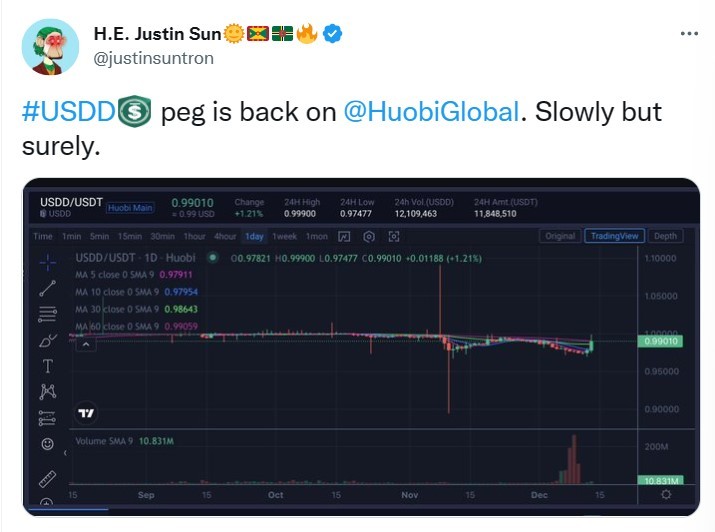 Tron founder, Justin Sun, tweeted that “USDD peg is back on Huobi Global. Slowly but surely.”