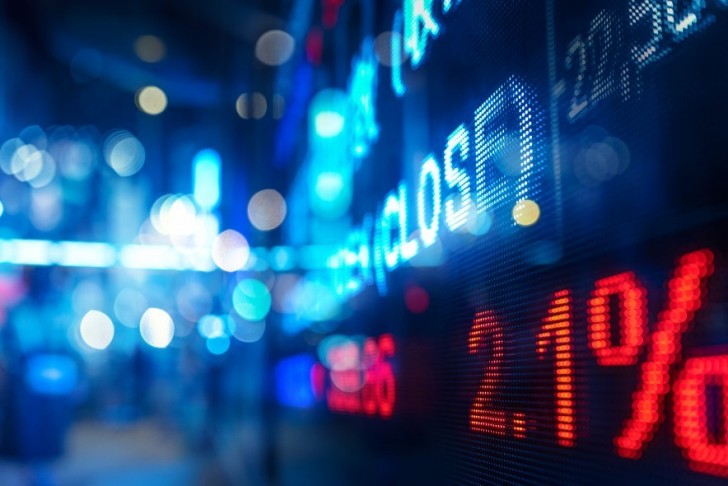 In last week’s article, I said that “Bitcoin is testing the $12,000 level once again and may attempt to break through the recent highs around $13,500.”  BTC did make a push higher and topped near the $13,000 mark, with the failure to breach resistance leading to an aggressive sell-off later in the week. The weakness in BTC has dragged the rest of the market down sharply also but some of the altcoins were looking bearish on the charts and the lack of a real catalyst is the reason for the bearish tone. 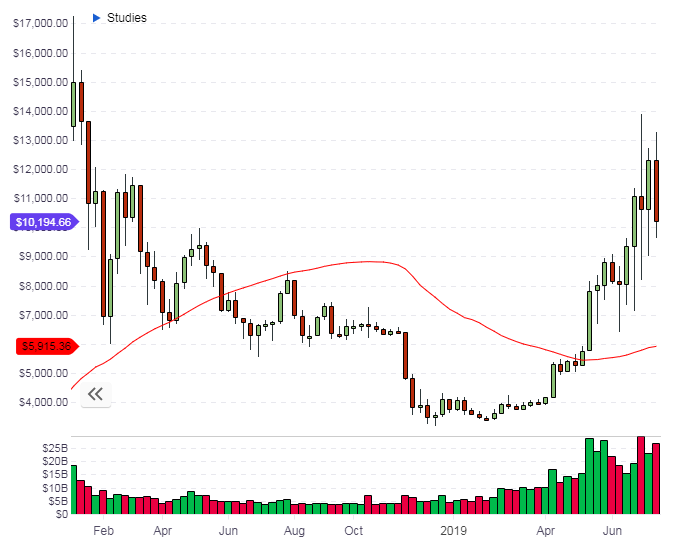 Again it’s all about volumes and despite the move lower across the board, BTC is still well above the 50ma on the weekly chart so this is merely a technical correction after a short squeeze. The next weeks will determine whether BTC can find some support and advance once again and the $10,000 level will act as the first significant area. As I discussed in the article last week, it would be wise to keep an eye on the situation at companies like Deutsche Bank and the traditional finance system. There are many risks to the system with Brexit, China trade wars, Middle East tensions and a fall in global trade.

The top 25 coins are flashing red for the last 7 days and it’s hard to find any winners in the top 100 with losses of 10-30% or more in some cases. One of the better performers is Egretia (EGT), which is up 40% on the week. EGT is an HTML5 blockchain which allows developers to build games and claims to have 1 billion users at present. I talked about the project in my July 1st article.

One other gainer on the week is V Systems, with a 17% advance. The architect of VSYS is Sunny King, a legendary blockchain developer who is seen as the inventor of the Proof-of-Stake (PoS) system, according to the project's website.

The developer has also had a hand in the creation of Peercoin and Primecoin and the PoS architecture has been the basis of many other coins. The V Systems project is an upgrade to PoS, which has been named Supernode Proof-of-Stake (SPoS). Ethereum has been planning to incorporate to a PoS in its coming upgrade so it will be interesting to see how this new approach affects other coins down the line.

The VSYS coin has 1.7 billion in circulation of a potential 3.6 billion with a current market cap of $373 million. The key ambition for the project is to be a decentralized cloud database with scalability and the plan is to introduce a smart contract platform in the future.

The chart below shows the performance of VSYS over the last 3 months with the coin moving from $0.12 to $0.2 on strong volume growth. 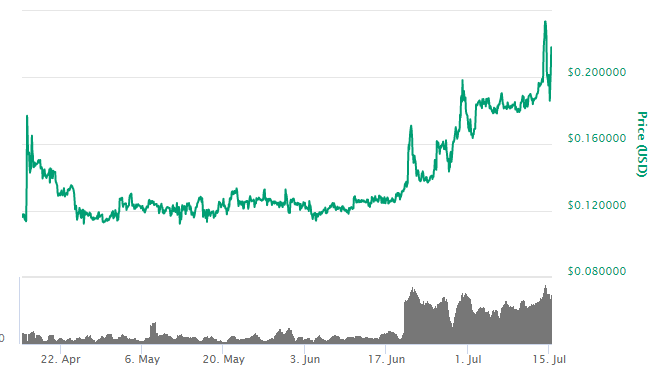 One of the surprising events for the week was a series of tweets on cryptocurrencies by President Trump.

Trump commented that he was,

…not a fan of Bitcoin and other Cryptocurrencies, which are not money, and whose value is highly volatile and based on thin air.

Facebook Libra’s “virtual currency” will have little standing or dependability. If Facebook and other companies want to become a bank, they must seek a new Banking Charter and become subject to all Banking Regulations, just like other Banks.

Like many, Trump is a veteran of the existing fiat money and central bank-driven system. Politicians and Wall Street will always bash the cryptocurrency market because a decentralized monetary system removes the power and control that they have over the world. The reality is that many see cryptocurrency as a viable alternative and demand, alongside trust continues to grow.

We have seen these types of comments in the past by people like Wall Street CEO Jamie Dimon of JP Morgan. His previous negativity about the sector looked a bit foolish when it was announced that his bank were working on a digital coin for payments.

When it comes to down to it, we should continue to follow the money and the actions of Wall Street and the large corporations who all seem to be frantically building their own blockchain infrastructure. They know this is the future but they also know they must protect the stability of the current system. Their fear is that cryptocurrency operations will become mainstream before they can control it.

The chart below shows the total value of the cryptocurrency market excluding Bitcoin on a monthly basis. The doji candle for June was a rejection at the previous support so there was a high probability that we would see further downside for the altcoin market. 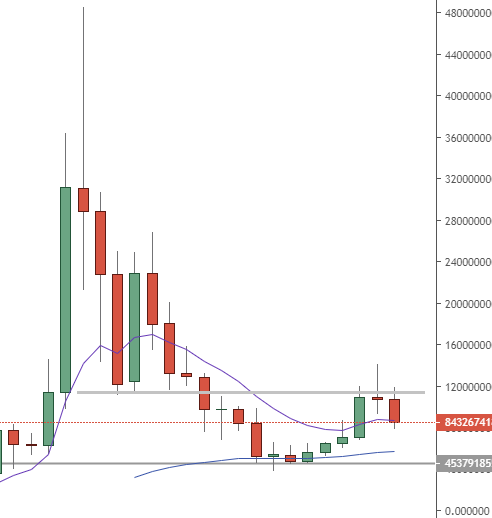 A look at the levels on the downside hints that a bearish close for July could see the market test the 50 moving average, which is also close to previous support. Watch out for a potential 30-40% drop in some coins. Some good support down at lower levels could be a great buying opportunity in the better altcoin projects.