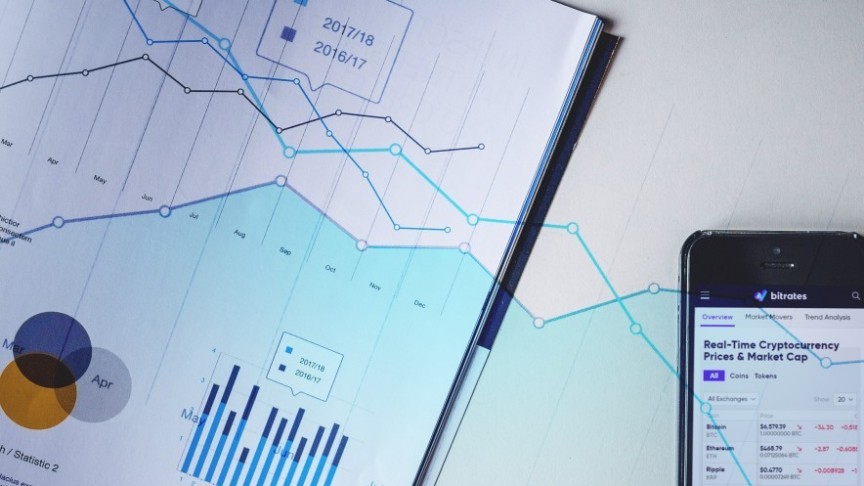 The major news heading into next week for the cryptocurrency market is the rejection of the application of the Winklevoss twins for the listing of their Bitcoin ETF on the Gemini exchange. Citing reasons that border mostly on security and investor protection, the SEC’s position continues to reflect the reluctance of mainstream regulators to full embrace cryptocurrency assets as part of the financial markets that investors can put money on. The SEC's decision was followed by Hester Peirce's public dissent.

It was also announced by Paysafe Ltd that Skrill is adding wallet support for Bitcoin, Litecoin, Bitcoin Cash and Ethereum, in a move that will increase retail adoption of these four cryptos. However, this is not expected to greatly impact the market, which is still looking for institutional adoption as the major impetus for price movements.

So what is the outlook heading into the last weekend of July 2018?

The decision by the SEC rejecting the application of the Winklevoss twins to launch a Bitcoin ETF on the Gemini exchange seems to have taken the steam off the actions of the Bitcoin bulls. Prices retreated mildly to as low as $7,800 before picking up steam again.

The long-term focus remains unchanged, with the price of BTC/USD still chasing the elusive minor resistance at $8,500 and the major support at $10,000. However, the formation of a rising wedge, as well as the fact that the price is now at a key Fibonacci retracement level, has started to make the likelihood of further upside moves in the short to medium-term unlikely. Traders need to keep this in focus as they perform their day trades. 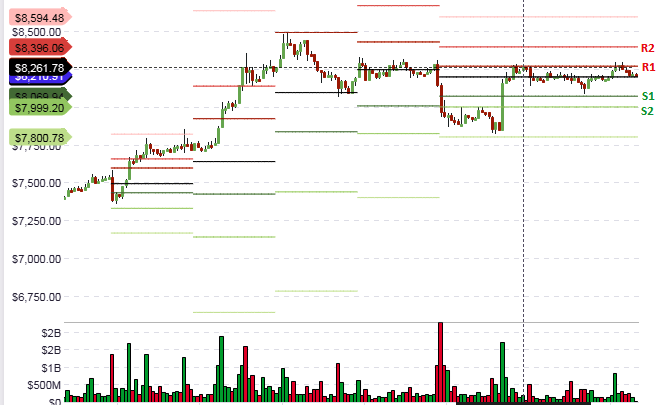 The intraday charts for the day currently show that trading volumes are quite thin, with price oscillating between the R1 pivot and the daily pivot line. Presently, price action is sitting on the daily pivot. Intraday trades have to be set up according to the behavior of the price on the pivots. If the daily pivot is broken to the downside, it is possible that price may retreat to the $8,038 level which was the daily pivot for Friday’s trading. This is also the price level of today’s S1 pivot. If the daily pivot holds firm, then we can expect a push to the R1 level of $8,261.

The daily charts for ETH/USD show that the pair continues to trade within the boundaries of the upward channel earlier identified in our previous analyses. Presently, the price is at the lower channel trendline at a price level of $465.71.

Unless there is a decisive break of this lower channel line, we should see a brief bounce on this pairing. However, a closing penetration of the lower trendline will see prices pushing lower. The key decision over the next few days will be on whether the price action will stay within the channel or will be broken to the downside as price sits on the lower boundaries of this channel. 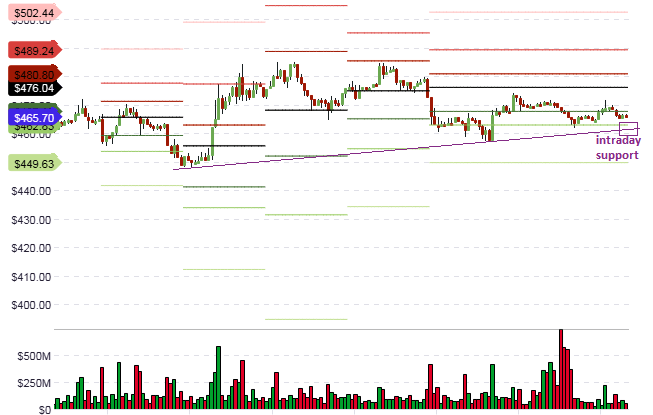 A look at the intraday charts will show that ETH/USD is heading towards the S2 support area. This is where the lower trendline of the channel will intersect that support pivot. Trading volumes are thin and if the S2 is not broken, then expect a short-term bounce from S2 to S1 and probably the daily pivot if the bulls are strong enough to overpower the rest of the market.

In our last analysis for the Bitcoin Cash pairing with the US Dollar, we had identified that the price action was trading within the boundaries of a rising channel. Price was trading at the upper channel line ($880) and was expected to have little room to move to the upside as a major resistance was around the corner.

Price action was resisted at the upper trend line, making way for a move down south to the other boundary of the channel. This is yet to be achieved and as far as the daily chart is concerned, price is in no man’s land.

With very little to work with on the daily charts, the emphasis is directed to the intraday setup, where we see that the daily pivot is acting as an intraday resistance to further upside movement. The sloping trendline which is the site of previous intraday support areas is intersecting the S1 area ($811.39). 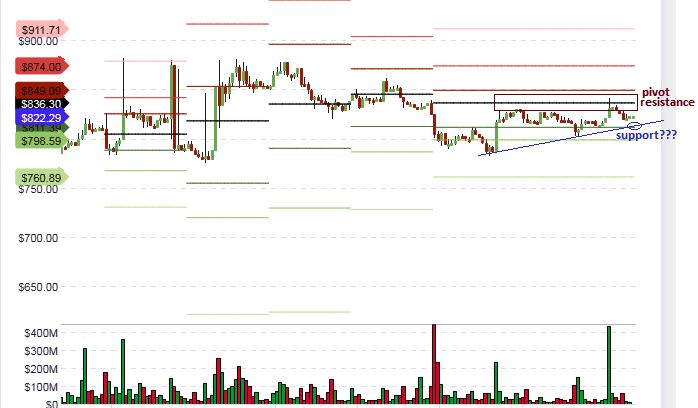 With S1 having already provided support earlier in the day, it is expected that this pivot will also provide further support for the day, provided we do not see some increase in selling volumes that will tilt momentum to the downside.

LTC/USD continues to find itself stuck in the upward price channel that was previously identified on the daily chart in our last three analyses for this pair. As at Thursday July 26, it was firmly at the upper channel line, but this line proved too strong for the price action, which has is now inching its way to the lower end of the channel. Litecoin is expected to bounce on the lower trendline and make another push upwards later in the week.

Hourly chart studies reveal that price had earlier been resisted at the S1 pivot line and is firmly headed to the S2 region. The lower channel trend line intersects with the S2 pivot. 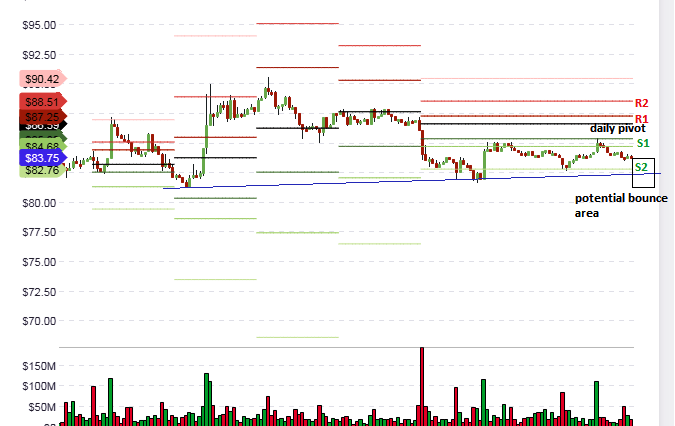 With trading volumes on both sides being very thin, it is expected that there may be a price bounce at the S2 pivot, provided there is no closing penetration of this pivot line. Prices are therefore stuck in this tight range, and range trading maybe the only option for the day.

The daily chart of the pairing between Stellar Lumens and the US Dollar, which was featured in our previous analysis, showed the presence of a potential bounce line. However this line did not provide the required support as price broke down below it to start inching downwards.

Rather, a new rising support line has emerged (more visible on the hourly chart below). Price action is also balanced right on the previous June 2018 resistance, which was broken last week and is now providing additional support.

The hourly chart shows that price is sitting right on the S1 pivot support, and this is at the same level as the rising support trendline. 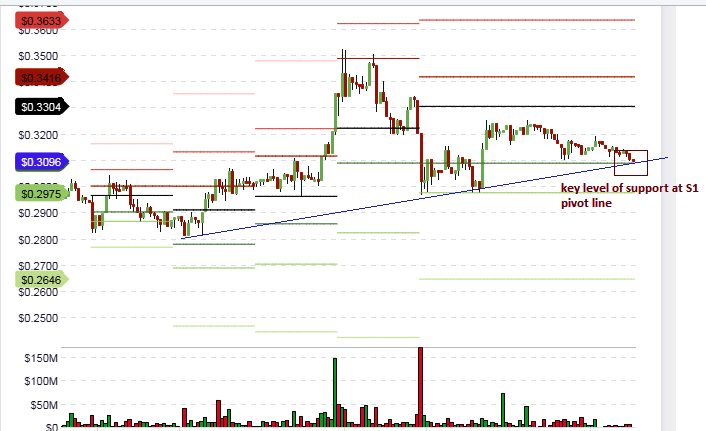 This could very well provide further impetus for price action to make another bounce upwards. However, this will depend on whether the S1 pivot and the rising trendline will provide the needed support for this to happen. Traders should watch to see if there is a failure of closing penetration to the downside and use this to set up a potential move to the north.