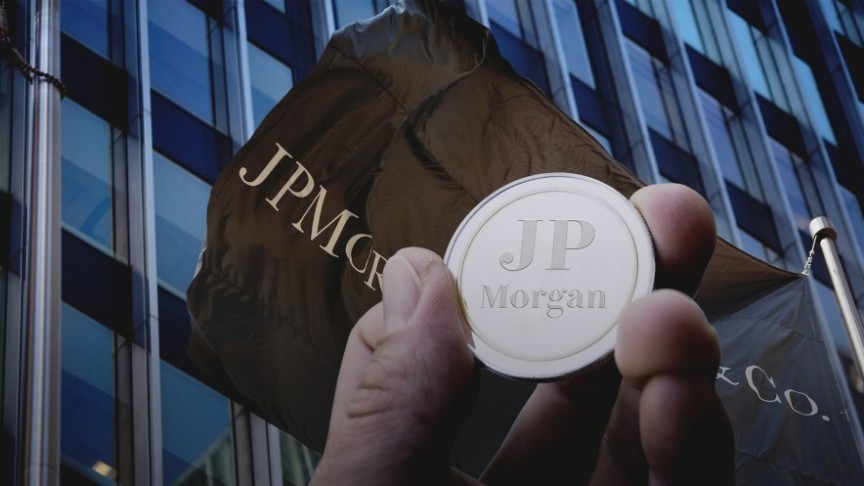 JP Morgan, one of the largest banking institutions in the world, is using crypto tech to bolster their financial services.

We’ve all heard the hype. Crypto-enthusiasts constantly tell us that crypto is the “money of the future”, it’s “redefining how the world transacts”, and it might even “decentralize the world’s wealth.'' How? By putting the mechanics of the economy into the hands of an unbiased, trustless algorithm and a decentralized network of nodes rather than the permissioned, private networks of governments and central banks. At its ideological core, crypto is for the people, it's revolutionary. For your average card-carrying crypto geek, the truth is undeniable - Crypto will replace fiat money, and it will change the world when it does.

But this idea that the crypto-ideology should be the sole reason crypto catches on might be a little off the mark. In fact, most of the practical use cases for crypto tech have nothing to do with whether or not our monetary system is corrupt or in the wrong hands, but rather the fact that our monetary system is ill-designed. The truth is the hyper-efficient, immutable ledgers and blockchain protocols developed around today's popular open-source crypto projects prove that digital currency ecosystems can function much more efficiently than the current banking networks and protocols that we use, but they don't necessarily need to replace them. If crypto technology can be leveraged by the institutions that manage our fiat money, there might be no reason to move to a truly "decentralized" version of money. If blockchains can be used by banks, crypto-tech could be just as likely to fix our current currency ecosystem as it could be to replace it.

Enter JPM Coin, a cryptocurrency devised by one of the largest banking institutions in the world, J.P. Morgan Chase. JPM Coin has taken the power of cryptocurrencies and applied it to the framework of the traditional fiat monetary system. JPM Coin is essentially a privately created digital representation of fiat value - a token that represents fiat money but is housed inside a private blockchain hosted by a trusted banking institution.

JPM Coin’s primary purpose will be similar to a "stablecoin", but used on a business-to-business (B2B) basis rather than a peer-to-peer basis. Corporations would deposit fiat currency at JP Morgan in exchange for JPM tokens, which could then be exchanged within a permissioned blockchain. At any time, the tokens can be redeemed for cash via JP Morgan should a client wish to transact outside of the blockchain.

The tokens will hold a guarantee that is familiar and stable in the eyes of your average multinational corporation because they are developed by a trusted party. JPM coins will initially be used to settle bonds and commodities transactions, or balance accounts on an inter-firm level with much faster transaction speeds than traditional banking network protocols, and presumably lower fees as well. Offloading these types of transactions onto the blockchain will drastically improve the financial services JP Morgan provides to its institutional clients, and give the bank a leading edge over other banks.

In an interview with CNBC, Umar Farooq, the head of JP Morgan's blockchain projects, attested to the endless future applications of the JPM Coin,

Money sloshes back and forth all over the world in a large enterprise[ …]The applications are frankly quite endless; anything where you have a distributed ledger which involves corporations or institutions, [we] can use this. / Umar Farooq, Head of JP Morgan's Blockchain Projects

Quorum is like "Ethereum - Business Edition". It uses the programming language, network structure and protocols of Ethereum, but adds in a whole pile of new tricks like a java-based privacy layer, highly specialized permission settings, voting based consensus mechanisms and comparatively better network performance. JP Morgan has been busy developing the Quorum blockchain to not only facilitate the use of JPM Coins, but to facilitate a wide range of blockchain-based services. Partnering with Microsoft's Azure service in early May, JP Morgan could now be considered the leading blockchain developer within the banking sector, and they are showing no signs of slowing down on the project.

Quorum is interesting because it shows just how effective blockchain technology can be when used by enterprise-grade financial institutions. By leveraging blockchain technology, JP Morgan has been able to carve out an entirely new path for transaction settlement on their networks, and when the JPM coin project goes live later this year, JP Morgan will likely be hosting the largest transaction volume on any permissioned blockchain, perhaps even giving some of "trustless" blockchains a run for their money with regard to transaction volume.

Pretty much every big corporation is our client, and most of the major banks in the world are, too, even if this was limited to JPM clients at the institutional level, it shouldn’t hold us back.

What does it mean for Crypto?

To some extent, the crypto flag-wavers are right. Bitcoin and the cryptocurrencies that have followed in its wake have already revolutionized how we look at money today, and they are continuing to grow in popularity, usage, and value. There is no denying the ideology behind the tech is inspiring, and the surge in adoption is indicative that the idea is catching on. Despite this, I'm not convinced the most revolutionary part about crypto is in its ideological underpinnings. It seems much more likely to me that the technology being developed around crypto is the truly revolutionary idea. Sure, “true” decentralized cryptos could remove central banks from the equation, and maybe that would be a good thing, Satoshi certainly thought so, but it's hard to say how the open market would treat a decentralized global currency post-adoption. Right now, Bitcoin is one of the most volatile assets on the planet, and is of no use to anyone looking to purchase a pizza, so I can safely say Bitcoin is not anywhere close to solving the problems facing our monetary system, (the problems it set out to solve) and it may never be.

Additionally, the appeal of a "trustless" cash system probably isn't something that is all that important to your average citizen, and certainly not to your average bank or government. Right now, the average user turning to crypto isn't doing so because of its convenience, reliability, and efficiency, but for its speculative value.

Money is an old idea, and the system we use to track its location, its owners and its availability is downright archaic. Undeniably, something is broken, but solutions like JP Morgan's privately issued JPM Coins on their proprietary blockchain show that crypto can fix these problems without drastically redefining our trust-based monetary system, and I strongly believe the JPM Coin is a precursor to a large push from banks and governments looking to use blockchain tech in a centralized manner within the financial system.