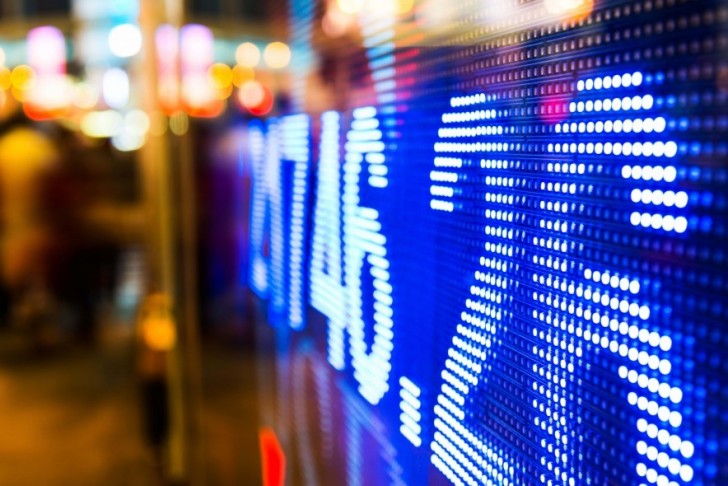 Bitcoin rallied above $20k as I predicted last week, and the coin touched a high of $24,300 on Sunday. The crypto market is off slightly on Monday as markets react to another bout of coronavirus panic in Europe.

Bitcoin had been rising last week as the U.S. dollar continued to get pummelled on the long-awaited second stimulus package for the United States, which is expected to be passed later today. The deal is for $900bn with the populace each getting a $600 check. The market has now priced that deal and today’s re-emergence of virus panic has the dollar higher by over 1%. A new virus strain found in the U.K. is said to be more contagious and this is seeing other countries placing a travel ban on flights to and from the country, with France cutting out 20% of food supplies by blocking haulage. Another round of chaos in the financial markets could see Bitcoin supported, although the March liquidity sell-off was a warning.

BTC shrugged off some negative news last week that saw the financial regulator FinCEN trying to get its claws into the cryptocurrency space. A rule proposed by the Treasury Department on Friday could see U.S. digital currency holders having to comply with know-your-customer (KYC) requirements in order to transfer their holdings from exchanges to personal wallets. Brian Armstrong, CEO of the Coinbase exchange said that the company would be challenging the rules, in a Tweet which was shared by Litecoin founder Charlie Lee. 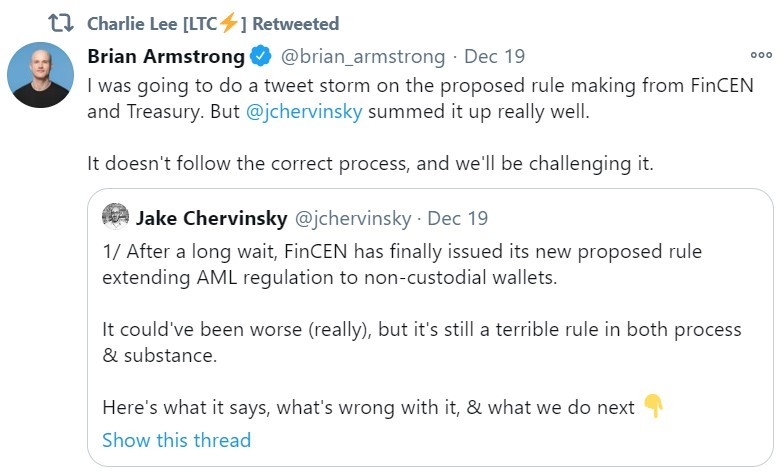 Bitcoin’s strong advance in the last week means that the coin will look to the $20k figure for support and traders should keep an eye on the stock markets. We are entering the year-end when portfolios are adjusted ahead of the new year and big investors may want to take profits on the frothy market valuations if they fear another round of virus turmoil in 2021.

The overall cryptocurrency market is now $662 bn and BTC is responsible for 66% of that figure.

Litecoin was the top-performing coin on the week with a 34% advance. The fifth-largest coin project now has a market cap of $7bn.

Grayscale, which is one of the largest digital asset managers has noted interest in the coin lately and released an in-depth research paper calling it, “one of the ecosystem’s most interesting digital currencies”. The company announced recently that investment assets under management had risen to $13 billion in mid-December. The company has more than $10bn invested in Bitcoin, and whilst there is only $75 million in LTC, demand has been rising so there is potential for LTC to be seen as “undervalued” by new investors as Bitcoin’s recent rally brings attention to the market.

Bitcoin Cash has seen a strong rally last week to finally try and catch up on the successful run of BTC. BCH was 20% higher on the week and trails Litecoin by one place in the list of coins with a market cap that is $1bn lower.

U.S. payments company Square has announced that it will allow the users of its Cash App to earn Bitcoin Cash back for purchases at “coffee shops, restaurants, and other merchants” when using the Cash Card.

The infamous digital entrepreneur and influencer Kim Dotcom also gave BCH a boost by telling his Twitter followers that the hard fork of BTC could rise to $3000 in the year ahead. His reasoning was that the coin would be used more and more by merchants. BCH was added to the recent PayPal move into cryptocurrencies and the Square endorsement is another step in the direction of larger adoption.

I’ve noted in the past that two-part monetary systems have always existed in the financial payments scene. The current system, which was built on gold as a value store and fiat could give way to a similar setup with BTC as the store and a coin like BCH for payments.

BCH was trading at $350 and the coin sees larger resistance at the $500 level, which capped the coin’s rally in February of this year before the virus selling took the market lower.

Users on the network can trade ERC-20 tokens and crypto assets in a decentralized ecosystem. The DEX has seen an increase in activity with the rise of Decentralized Finance (DeFi) this year.

Last month, Bancor said that the protocol had reached $60 million in total locked value. The project developers commented in a November update:

“Following the launch of Bancor v2.1 and the announcement of BNT liquidity mining, total value locked (TVL) increased 5X from $15M to over $85M, driving a 300% increase in weekly swap fees generated by the protocol.”

One of the key benefits of Bancor v2.1 is an improvement over the existing AMM model, as LPs can remain long on their tokens and earn swap fees without having to worry that price volatility could reduce the value of their stake.

The price of Bancor has rocketed this year from $0.1600 in May to near $3.00 in August. The coin pulled back and is now looking to move higher once more with a move to almost $2.20 last week.