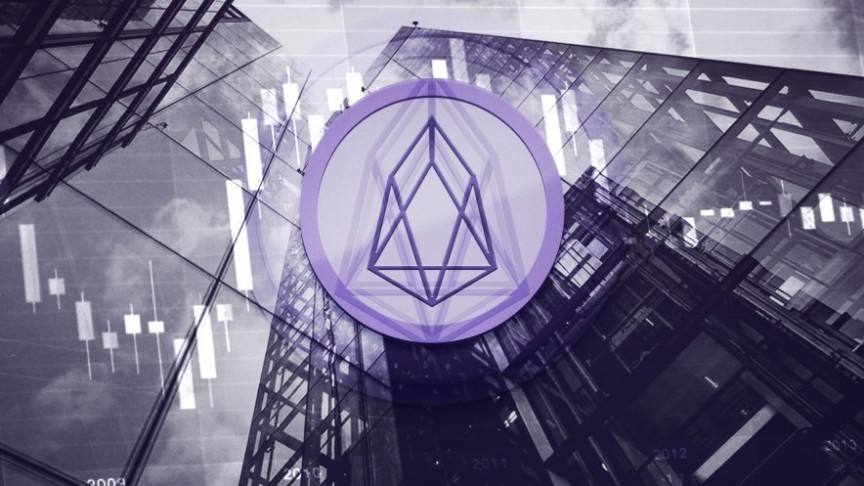 From the unclear role of ECAF to claims of mismanagement, a possible Block.one monopoly, and a RAM shortage, the EOS road has been rocky so far.

EOS has faced numerous challenges since its mainnet launch started on June 9, 2018. As a result, in the month following the launch, EOS value has tanked 27%. This article will cover three debacles in recent weeks that have plagued EOS, namely the inaction of the EOS Core Arbitration Forum (ECAF), surprise votes by Block.one, and the skyrocketing prices of RAM, which have hindered the development of the EOS ecosystem and shaken the community.

What is EOS Core Arbitration Forum (Not) Doing?

Shortly after the launch of the EOSIO mainnet, Block Producer EOS42 announced that accounts known to have been compromised during the registration process of the mainnet token swap would be unlocked, leaving $15 million worth of EOS tokens vulnerable to theft. Block Producers turned to ECAF for guidance, but the arbitration body only gave an advisory note as well as a disclaimer that it may not be in the position to give outright arbitration rulings. The decision was left up to the Block Producers.

By a unanimous vote, the Block Producers unilaterally froze the seven affected accounts, stopping these addresses from initiating and following through with transactions. This unleashed furious debate within the community.

Decentralization purists denounced the move as a clear instance of abuse of power. Charlie Shrem, vocal advocate of BTC claimed that "the point of crypto is no one should have that power", while Nick Szabo, the father of smart contracts, tweeted the following, 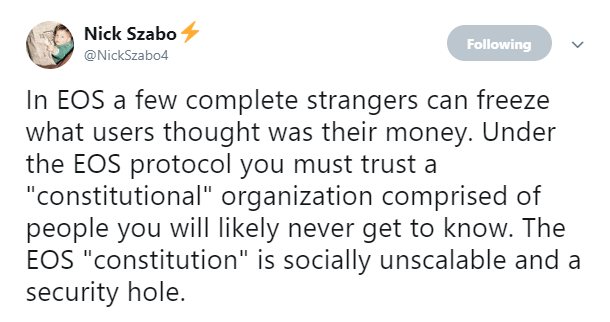 Representatives from EOS Block Producers defended the decision, with the justification that since the updated EOSIO constitution has not yet been ratified, the responsibility lies on the Block Producers to ensure the safety and security of the EOS Blockchain.

Meanwhile, Dan Larimer, CTO of Block.one who wrote the EOSIO code, disagreed with the Block Producers’ actions. He claims that the precedence set by the Block Producer intervention will do more damage to the entire EOS ecosystem. Instead, he suggested allowing the phishing scam to go through and for the EOS Block Producer to make a charitable donation to help the affected instead. This did not come to pass.

As much I would like to see the previous key holders receive their tokens back, I feel that the precedent established by such intervention would do more damage to the entire EOS ecosystem than the money they receive. -- Dan Larimer, CTO of EOS

Is ECAF a "Special Advisor" or "Supreme Court"?

This entire debacle unfolded because of the uncertainty wrought by ECAF’s initial indecision. It led many to ask what the role of the ECAF actually is. If Block Producers have the role of “Congress”, should ECAF's role be as a "special advisor to Congress" or as a "Supreme Court"? In other words, should ECAF be advising or overriding decisions made by Block Producers? Block producers are split with differing views on this topic.

One school of thought is that Block Producers should make their decisions after assessing the situation and taking guidance from ECAF; Block Producers should not be blind robots but use their veto wisely. Another viewpoint argues that if ECAF is merely advisory, what is the point of having an arbitrating forum? Arbitration is meant to bring a decisive end to conflicting interests.

This debate is still ongoing between Block Producers, Block.one, and the EOS community with no end in sight. Furthermore, as the confusion of ECAF continues, other mistakes and controversies have begun to surface.

EOS New York, one of the Block Producers, suspended all orders coming from ECAF following a hoax ECAF order, arguing that they were unable to tell which orders are legitimately circulated from ECAF. This seems to be a simple miscommunication error that could be easily averted.

EOSStore also made the news for missing an announcement of the second ECAF order and not executing the blacklist, which resulted in the continued processing of a blacklist, as blacklisting requires all Block Producers to act unanimously. These miscommunications and mistakes did little to allay the concerns of EOS investors.

Block.one Taking Over the Block Producer Voting with 10% of Available Votes

Making matters worse, on Jun 28, 2018, Block.one announced that it will begin to stake its share of tokens to vote for Block Producers. Block.one may, therefore, handpick the 21 Block Producers they fancy since it holds a quarter of the current voting power. Observers pointed out that Block.one may unilaterally vote in Block Producer Candidates, much like a monopoly. This backtracking goes against Block.one's previous claims that they would not be involved in the voting for candidates.

EOS's woes do not stop at execution errors. Speculation in the EOS Random Access Memory (RAM) market has laid bare the design flaws of the EOS public Blockchain.

What is EOS RAM?

Full nodes are expected to have a certain amount of RAM for maximum performance. The RAM is required to store account information. When users retrieve data, the user cannot query the entire Blockchain because it takes too long. Instead, data is stored in RAM and may be retrieved from memory quickly. Every single piece of data is replicated in the RAM of every node which means keeping data in RAM will be wastefully expensive.

Unfortunately, speculators have started to hoard RAM, driving up the price of RAM, which prohibits developers from building applications on EOS. There seems to be no quick fix, as EOS adopts a free-market approach to allocating RAM and is subject entirely to market demands

It remains to be seen if the EOS community will overcome the execution errors and design flaws plaguing its mainnet launch. Other public Blockchains keen to avoid the problems of the EOS mainnet launch, will no doubt be keeping a close eye on the project.

This article has spurred a discussion on r/Eos subreddit

We invite members of the community who are interested in formulating an articulate response to this article to contact editor@bitrates.com