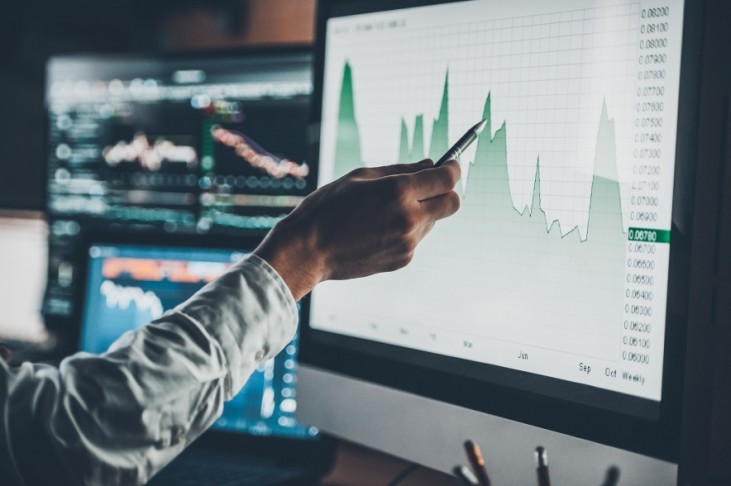 BTC above $58k and ETH at $2,000 as the crypto rally moves to altcoins. CRO and RVN fly high with big gains. UNI faces swap competition.

Ethereum capitalized on the cryptocurrency rally to hit new highs above the $2,000 level. The price has since pulled back to the $1,780 area, but the coin is still above the previous highs near $1,600.

As was seen in the summer rally of 2020, Ethereum’s gains are being overshadowed by surging growth in the Decentralized Finance space (DeFI). The total value locked (TVL) in the sector is now $42 billion, having surged almost three times its value since the turn of the year. It was noted today that, “the aggregate value of the 100 largest tokens by market cap currently stands at $83 trillion”. 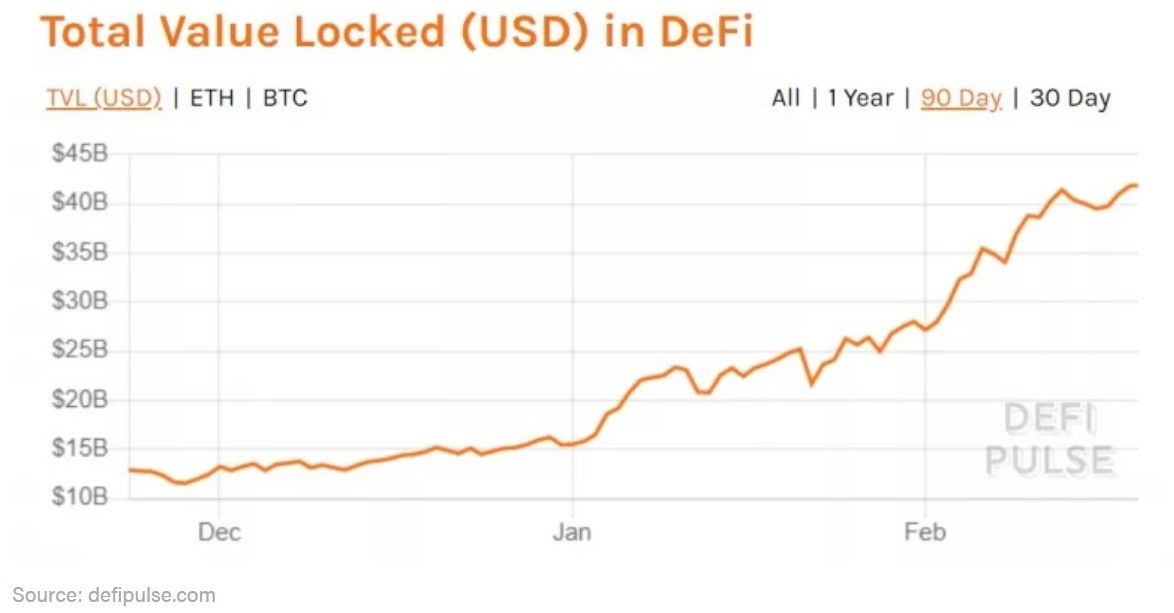 ETH is a benefactor of this rise in popularity as the majority of projects using blockchain technology for traditional finance practices are housed on the ether blockchain.

One obstacle to the growth of these projects and the sector has been the rise of Ethereum gas fees. The next development for ETH is the path to a V2.0 system that will migrate to a more scalable and less energy-intensive blockchain.

The recent surge in Ethereum and Bitcoin has seen Elon Musk talking the prices down for the first time. Musk was replying to the standard Twitter arguments about Bitcoin and gold when he said:

Money is just data that allows us to avoid the inconvenience of barter… That said, BTC & ETH do seem high lol.

His comments will take the steam out of the recent Tesla-related surge after the carmaker announced it had purchased $1.5 billion in BTC. Musk’s comments would suggest that Tesla won’t be buying a larger stake at these levels, while they may convince other corporates to also back away from imminent purchases.

ETH may look to test the $1,600 level again as the crypto sector is surely due a technical correction after a serious run of gains.

Uniswap is one of the DeFi projects seeing big gains in its governance token. Uniswap has emerged as one of the top decentralized exchanges (DEX) that are leading the current bull run in crypto finance.

The last few months have seen the Uniswap team focused on developing version 3. Uniswap was one of the original liquidity providers to other projects and this gave the project a first-mover advantage in the market. The coin sees over $1-2 billion in daily volume and a high of $5.7 billion was registered in January. The Uniswap project is ranked at number 12 in the list of coins with a market cap of $9bn.

Uniswap is seeing swift competition from PancakeSwao and SushiSwap for DEX superiority and PancakeSwap (CAKE) took over the mantle as the world’s largest decentralized exchange recently with $1.7 billion traded versus Uniswap’s $1.6 billion.

The price of UNI surged to $32 last week from lows near $17 and the coin has easily surpassed the 2020 highs of $8.800. This is happening when mass adoption and usage of DeFi finance tools haven’t appeared. Once ETH completes the upgrade to lower gas fees, the price could continue higher for UNI.

Crypto.Com has seen its CRO coin surge 70% in the past 24 hours as the Bitcoin and Ethereum-led rally starts to expand outwards into smaller altcoins. With the prices of BTC and ETH continuing to hit new highs, investors are likely reinvesting profits to take advantage of lower valuations.

CRO has rallied 180% in total for the week and the provider of crypto visa cards has moved to number 16 in the list of coins by market cap. It has been a strong February for the coin, which traded near the $0.05 level at the start of the month and now trades at $0.25.

Crypto.com is benefitting from being a multi-product offering with its own exchange and the ability to obtain credit. The project also offers the ability to swap and farm DeFi coins in its own Swap Protocol. These multi-product offerings are starting to appeal to investors in light of the US dollar’s waning price and influence. Because of the gains that were seen in cryptocurrencies recently. Investors are less interested in cashing out on recent gains, with many preferring to earn interest or reinvest into other tokens.

Another strong altcoin was Ravencoin, which was 127% higher over the last seven days with the coin testing a break into the top 50 coins.

RVN has also seen a huge rise in February with similar price action to CRO. Ravencoin traded under $0.05 but has since surged above $0.25. RVN has not been able to hold those gains and has since pulled back by 17% to trade at $0.18.

Ravencoin markets itself as a “peer-to-peer blockchain, handling the efficient creation and transfer of assets”. The coin was created as a reference to the ravens of Westeros in the hit tv show, Game of Thrones. Ravencoin is said to be, “designed to carry statements of truth about who owns what assets”. The coin can be mined using standard GPU hardware and was created to overcome the problem of centralized mining.

The recent problems with the GameStop squeeze in the stock market have also seen traders move their assets out of Wall Street exchanges to trade in the decentralized world.

Raven’s development team saw this and commented on Twitter:

Ravencoin was specifically designed and developed with securities as a major use case. Specifically, the problems being seen in public markets due to bad ledgers may be solved by distributed ledger technology.

The recent gains in these coins could mean that further big moves are ahead as retail investors increasingly catch the trading bug.

The Most Popular Choices For Crypto Gambling Online

Among some 4,000 digital coins in circulation, not all of them share the same popularity and practicality in the gambling industry.

A Simple Guide to Exchanging Cryptocurrencies ETH to BTC