UK Police Seize, Convert and Retain £1.2m Worth of Bitcoin

UK Police Seize, Convert and Retain £1.2m Worth of Bitcoin

The Surrey Police is the first UK police arm to convert Bitcoin that has been seized as part of a criminal probe. The force converted the 295 seized Bitcoins into GBP, netting £1.25 million. The coins were confiscated from a convicted cannabis dealer’s hardware wallet, and the converted funds will be used by the Surrey Police to fund future operations.

The jolt to the Surrey Police's fund pool follows the conclusion of a Proceeds of Crime Act hearing that took place Thursday, 19 July, in which Latvian Seregjs Teresko was found to be the beneficiary of money laundering and drug dealing. The Kingston Crown Court ruled that Teresko had earned £2,058,612.65, including the 295 confiscated Bitcoins, from his various criminal activities. The court also ruled that the Surrey Police will be allowed to keep 18.8% of the heist where over £250,000 was found in cash. Surrey Police said in an official tweet, 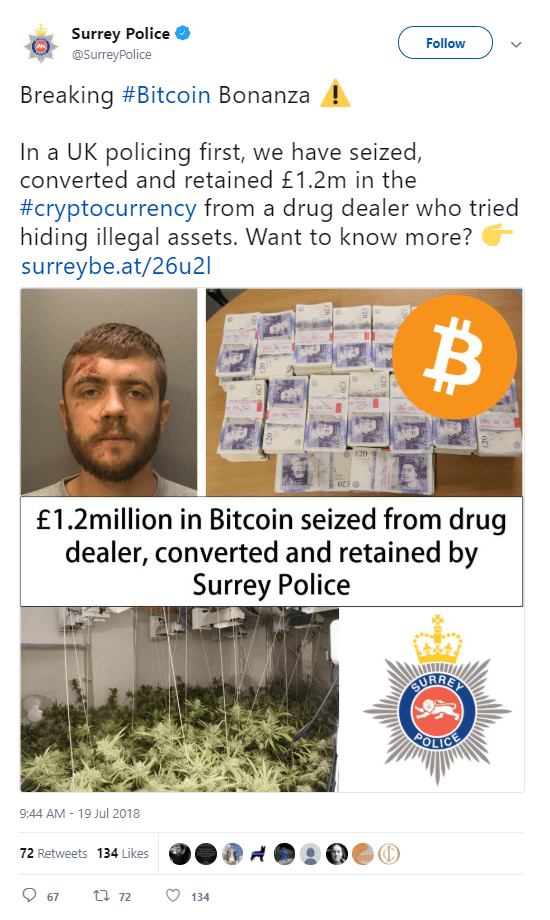 Seregjs Teresko’s criminal activities were discovered accidentally after his partner and bystanders alarmed the police about his alleged kidnapping from a house in Virgina Water in April 2017.

During investigations, police discovered a cannabis factory, cash in Euros, Sterling, and Thai Baht, jewelry, electronics, credit cards and fake European IDs. Following his arrest the following day the police found his cryptocurrency hardware wallet where he kept the Bitcoins. Teresko pleaded guilty and was jailed for nine years and three months imprisonment.

Cryptocurrency is used legitimately by a lot of people but it's also used by criminals. We know that in dark marketplaces Bitcoin is the chosen medium of exchange.