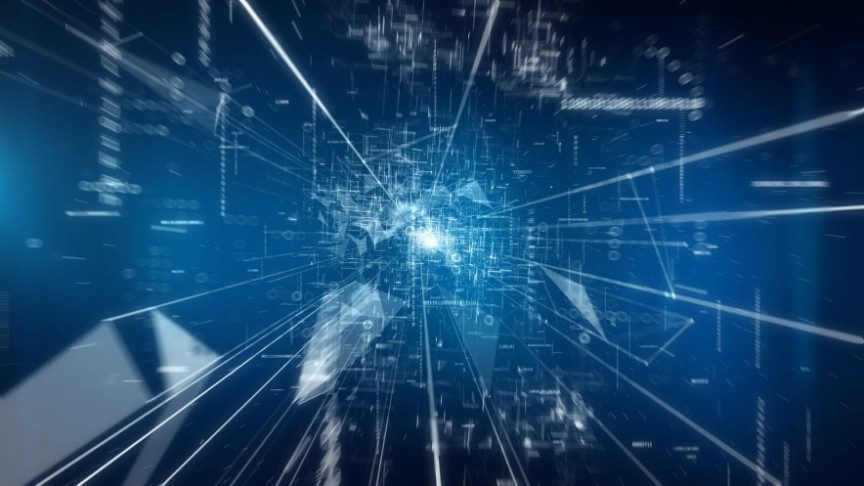 BTC was flat for the week after recent strong gains but some altcoins saw strong advances with DCR and REP leading the pack.

It was a relatively quiet week in the cryptocurrency market with BTC giving up 1% of its recent strong advance from the $7,500 support level and the coin trades just under the $10,000 level which is providing immediate resistance for the week ahead. Despite the flat price action in Bitcoin there was a number of top coins showing gains of up to 5%. The market also continues to grow amongst institutional investors with the Bakkt exchange seeing $1 million of open interest. The daily trading volume has also grown on the exchange from $1.2 million to $6 million. These figures are still small but the platform exists if a speculative rally was to take hold once more.

The Tron network has been celebrating the news that accounts on the network had passed the 4 million number after the Samsung tie-up. The news was shared in a tweet by the project’s founder. 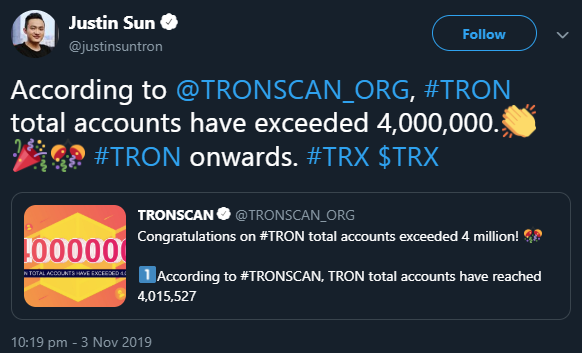 Samsung added TRX to its decentralized app store, which led to a 30% gain for TRX.

It was also noted recently that 12% of Tether is now on the TRX blockchain following a chain swap. After an April launch, the total supply of TRC-20-based USDT has now hit 490 million after USDT was swapped from Ethereum’s ERC-20 tokens. The chain swap allows traders to diversify their holdings and obtain access to developments on the new blockchain. The Samsung deal will have some investors eyeing the potential for an increase in the future value of TRX.

The price of TRX has paused after the recent rally but has found support just under the $0.020 level and will now look to get above there. Initial resistance is at $0.0250 and $0.0300.

Decred was a big gainer on the week with a 40% surge to trade near the $24 level. The coin now holds the number 33 spot in the list of coins by market cap with a valuation of $235 million.

The rise in the coin came after Decred upgraded its public proposals system. The community welcomed new developments in the Politeia off-chain governance system. Decred has been praised in the past for its strong governance system. The updates also follow earlier clarification over the project’s privacy features that have been added to the wallet.

The rally in DCR has found resistance at the 50 moving average but the likelihood of a significant bottom is high due to the rally from support levels. DCR can test the $35.00 level if it moves through the current resistance level.

Augur’s REP token was another winner that was up 30% on the week. Augur is a predictive platform for betting on the outcome of sports or events. Augur is moving to a v2 solution in Q1 2020 with Ox and DAI as supported currencies. The project has also decided to follow up quickly with the v3 implementation for fiat on-ramps and additional log in options.

V2 will have a re-vamped trading user interface and betting interface.

The platform update was summarized in the project blog:

Augur, as a protocol, works. Now, it's time to switch focus to UX/UI, user onboarding and market-making in order to actualize the worlds most accessible, no limit betting platform.

REP currently holds the number 48 spot in the list of coins with a $128m valuation. The rally in REP is similar to the action we’ve seen in other coins with a rally from the key support, which may hint at a coming altcoin rally in the months ahead. Resistance is at $12.50 and getting through there can open up a move towards the $25.00 level.

The Chiliz token (CHZ) has continued to gain after I wrote about the project back in September. The CHZ token is used on the Socios.com platform, which is an app for soccer fans to engage with their favorite clubs. I noted previously that the top Italian and French teams were on the platform in Juventus and PSG, and the Turkish club Galatasaray have since signed up to the app. The project has obvious potential to add further clubs and build a strong user network due to the popularity of the sport. The app allows users to earn rewards, merchandise and also an opportunity to vote on some club matters.

In other market news, the BitMEX exchange was facing heat for leaking the email address of thousands of its users. The company sent an email update to its users and used the carbon copy (CC) option instead of the blind carbon copy (BCC) method and thus allowed users to see 30,000 thousand other users’ addresses. BCH and BSV also continued their seesaw trading after news that the BSV founder Craig Wright pulled out of a settlement for 500,000 BTC to former partner Dave Kleiman. This will lead to the trial continuing and the news saw BCH gain 10% and BSV lose around 7%.

The week ahead in cryptocurrencies will likely be defined by BTC’s price action around the key $10,000 figure. The market paused last week after the strong rally and traders will now decide its next direction. As mentioned earlier in the article, the number of coins rallying from key support levels could hint at further gains in the months ahead.