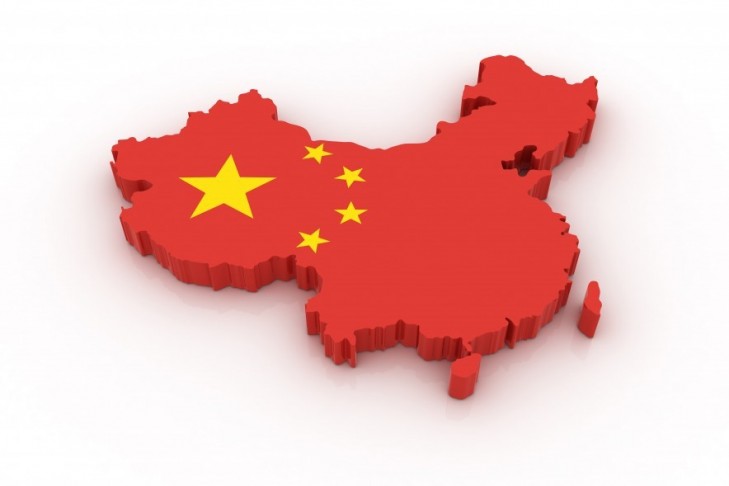 The private Chinese cryptocurrency market is facing yet another obstacle after the government announced a string of new bans. While crypto trading and exchanges have been banned since last year, the new bans are focused on the hosting of crypto-related events in Beijing's downtown district as well as a crackdown on online communication about crypto projects. In the third bombshell to drop this week, the government today announced it would block access to 120 offshore cryptocurrency exchanges from the country's internet using the nation's infamous "Great Firewall".

The unprecedented bans come as the Chinese government has allocated over $3 billion to support blockchain projects, a fact that demonstrates very clearly that the government intends to control the new industry rather than let the private market organically develop.

The first news to break about China's latest crackdown came in the wake of an August 17 ruling released by the Chaoyang District government banning hotels, offices, and malls from hosting crypto-related events in Beijing's Chaoyang district. Chaoyang is the epicenter of fintech in Beijing. As Dovey Wan, managing director at Danhua Capital, pointed out on Twitter, since Chaoyang is a symbolic district, the ban there essentially sets the tone for the government's attitude to crypto events across China. Wan is among the most influential voices discussing the bans on social media. Her Twitter response to the news provides an excellent step by step commentary from within the Chinese cryptosphere. Among her comments was the statement that the new bans are unsurprising given the upcoming anniversary of the ban on exchanges and trading: 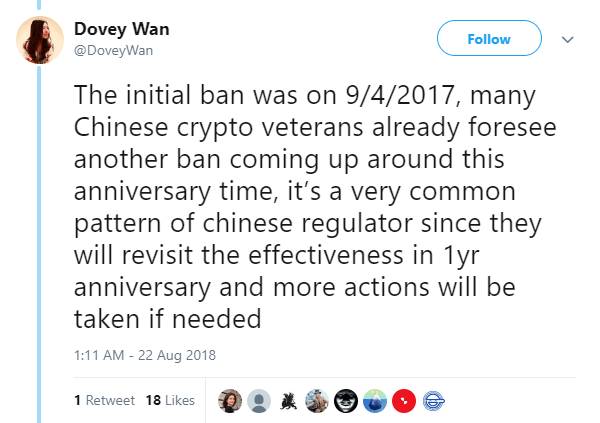 The government is also cracking down on internet communication in the cryptosphere, with Tencent, operators of popular social media app WeChat announcing that it would block several crypto-related accounts in accordance with new regulations. The South China Morning Post first reported yesterday that "at least eight blockchain and cryptocurrency-focused online media outlets found their official public accounts on WeChat blocked." The accounts were suspected of spreading information about ICOs and crypto trading, which put them in violation of recent regulations implemented by the Cyberspace Administration of China.

The latest news will have perhaps the most wide-reaching effects as the government announced it block access to 124 offshore cryptocurrency exchanges that currently serve customers on China's mainland. The move will effectively erase the exchanges from China's internet. The government also announced that it would continue to crack down on websites advertising ICO's or exchanges on the mainland as well.

Despite the bans, China is still seemingly very pro-blockchain. The Chinese government has recently allocated over $3 billion to funding blockchain projects. They have also continued to release reports on the value and potential they estimate for each cryptocurrency project with their annual rankings showing this year that EOS is again the most promising project in their eyes. There have also been widespread rumors that the government is considering issuing a national cryptocurrency. It is clear that there is great interest in the technology mixed with a clear desire to control how it develops within China's borders. The upcoming September 4th annual review of China's initial ban on crypto trading will likely reveal a clearer picture what is to come. For the time being it appears that a tightening control is how China intends to handle the burgeoning industry.