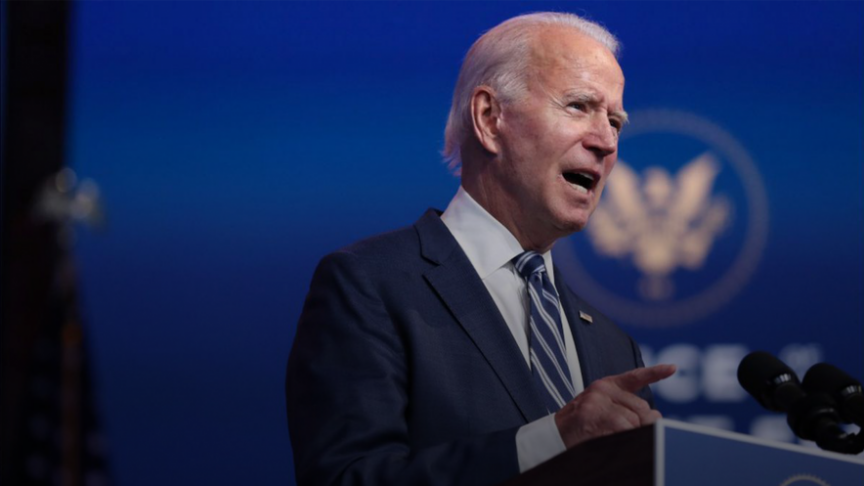 That could have an effect on the crypto industry. Not only will new leaders be appointed to certain leadership positions, but government spending could also reshape the economy and affect cryptocurrency prices. Here’s what the crypto community expects.

One of Biden’s first and most notable policy decisions concerns the creation of a $3 trillion stimulus package for COVID-19 relief.

That stimulus package could cause inflation of the U.S. dollar. This could in turn cause institutional investors to turn to alternative assets like Bitcoin and gold as a hedge against inflation. Greater demand for Bitcoin could drive up prices due to scarcity.

More directly, the handout could give retail investors more money to spend on Bitcoin, though it is not clear that this would significantly impact BTC prices.

Some of the predicted effects have arguably been seen already, simply in anticipation of the effects of a stimulus package. One Twitter analyst noted that Bitcoin prices rose by about 35% when the plan was proposed in July 2020. However, it is possible other factors were at play then—including Bitcoin’s miner reward halving.

Biden’s administration will bring on board new regulatory leaders, some of whom are hesitant to embrace cryptocurrency and Bitcoin.

Most notable is Janet Yellen, a former U.S. Federal Reserve chair who has been appointed to head the U.S. Treasury as its secretary. Yellen has historically been negative toward cryptocurrency. She has stated that Bitcoin is “not a stable store of value and it doesn’t constitute legal tender,” and that she is “not a fan” of the cryptocurrency. It is unclear how this will affect her decisions.

Meanwhile, Securities and Exchange Commission (SEC) chairman Jay Clayton has left his position. Former CFTC chair Gary Gensler will likely replace him. Gensler has previously suggested that regulation needs significant changes before crypto goes mainstream. Though Gensler seems less hostile to cryptocurrency than Clayton, it is clear that the SEC will continue to regulate crypto heavily.

Finally, at least one pro-crypto regulator will leave office. Brian Brooks, who currently heads the Office of the Comptroller of Currency (OCC), will leave that position before January ends. While leading the OCC, Brooks introduced new guidelines that allow banks to handle stablecoins. He also lobbied for nation-wide cryptocurrency rules. It is unclear whether his successor will continue these projects.

Biden himself has said little about cryptocurrency and the blockchain industry. His stances on two broader issues, encryption and online privacy, are mixed.

Biden appears to have a moderately pro-privacy stance, at least when it comes to the public. As part of last year’s presidential debates, Biden suggested that his administration would expand data privacy and commit to a more open internet.

However, Biden's past actions cast doubt on that. In the 1990s, Biden served as chairman of the Judiciary Committee. At that time, he introduced two anti-encryption bills, the Comprehensive Counter-Terrorism Act and the Violent Crime Control Act.

In fact, those early laws led to the creation of PGP, an encryption protocol that was a starting point for early cryptographic activism. One contributor to PGP, Hal Finney, even went on to become a developer of Bitcoin as well.

Ultimately, Biden's exact stance on these issues may be irrelevant to cryptocurrency’s strongest advocates, who see Bitcoin as a way to escape government restrictions.

While general economic stimulus packages could promote Bitcoin investments under the Biden administration, a lack of clear regulation and policies could be an issue if the administration inhibits new crypto startups and development in the United States.

In addition to creating laws and regulations, regulators will be forced to deal with ongoing real-world issues. Those issues include the SEC’s lawsuit against Ripple, Facebook’s ongoing attempts to launch its Diem stablecoin, and various efforts to perform surveillance on crypto investors for taxation purposes.

Only time will tell whether the Biden administration confronts the growing crypto industry or turn its attention away from its development.