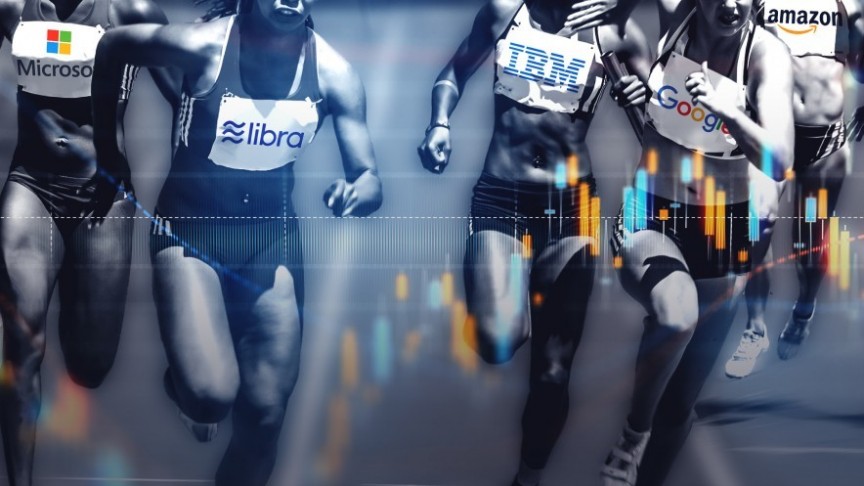 Facebook is working with 27 corporate partners to power Libra. How can Microsoft, Amazon, IBM, and Google compete? Will they try?

On June 18, Facebook announced Libra, its cryptocurrency and blockchain ecosystem. Libra will bring cryptocurrency to  Facebook's gigantic user base, and it will also introduce blockchain to many businesses and commercial users. However, the most important part of the announcement isn't Libra itself: it is the fact that several big-name companies are solidly backing the Libra product line. VISA, MasterCard, PayPal, and over 20 other companies are involved.

This makes Libra one of the biggest crypto projects thus far in terms of cooperation. Other major tech companies, including IBM, Microsoft, and Amazon have also moved into blockchain in the past, but none of these efforts exist on the same scale as Libra, nor do they carry the same public appeal. This raises the question of whether big tech companies can compete with Facebook's ambitious plans. Here is the state of affairs for each company.

On the whole, Microsoft's blockchain services are almost entirely different from Facebook's Libra platform. Microsoft's blockchain offerings can be used to manage financial data, supply chain data, customer rewards, and other types of business information. For example, Microsoft itself is using Quorum to handle royalty payment information for XBOX developers. This means Microsoft will not compete directly with Libra, which is designed to handle actual cryptocurrency-based transactions.

Amazon is best known as an e-commerce site, so it may be logical for it to introduce crypto-based payment methods. However, the company is solely focused on providing enterprise blockchain services, much like Microsoft. Amazon gives developers access to blockchain tools and platforms through Amazon Web Services and Amazon Managed Blockchain. These services provide access to major blockchain platforms, including Hyperledger Fabric and Ethereum, but this has little to do with cryptocurrency.

There is no sign that Amazon will provide cryptocurrency-related services in the future. Patrick Gauthier, vice president of Amazon Pay, recently stated that Amazon does not intend to provide crypto-integrated financial products or introduce its own cryptocurrency. Gauthier describes the company's attitude toward cryptocurrency as "pragmatic," and he notes that Amazon "doesn't really deal in the speculative." In other words, Amazon won't compete with Libra.

IBM is slightly different from Microsoft and Amazon. It does provide enterprise blockchain platforms, and it is a leading member of the Hyperledger project. However, IBM also puts a large emphasis on institutional finance: this year, it launched IBM World Wire, which is aimed at banks and financial institutions. This puts IBM in an interesting competitive position: whereas Libra is using blockchain technology to break away from traditional banking, IBM is using blockchain to serve banks directly.

Incidentally, IBM partnered with Stronghold last year to create a cryptocurrency that is fairly similar to Facebook's Libra token. Both cryptocurrencies are dollar-pegged stablecoins, and both are available to general users. However, this April, Stronghold discontinued support for general users, and the stablecoin is now exclusively targeted at non-retail customers. This means that IBM's Stronghold token won't compete with Facebook's Libra token―at least, not in the public eye.

Google is fairly different from other big tech companies. It focuses on data analytics, and it has been offering crypto datasets for some time. Google has also announced a partnership with Chainlink, which will allow blockchain developers to make use of external data sources. There is currently no reason to think that Google will offer crypto services to the general public. That said, Google Pay has been known to cooperate with its rivals, so eventual involvement with Libra is conceivable.

Can These Companies Compete?

The bottom line is this: most major tech companies aren't concerned with cryptocurrency. Users shouldn't expect to see cryptocurrency-related features from Microsoft, Amazon, IBM, or Google, at least not for the foreseeable future. If these companies do take an interest in crypto, they might not choose to go it alone. Instead, they may choose to simply take part in the Libra Association, which is planning to bring many other companies on board.

Facebook's Libra cryptocurrency will probably receive more public attention than any other company's blockchain efforts. However, this doesn't necessarily mean that Facebook will be the most successful―just that Facebook will raise the most awareness. Microsoft, Amazon, Google, and IBM will continue to move forward by providing blockchain services that are not directly comparable to Libra in terms of value―and they will in all likelihood be successful in their own right.