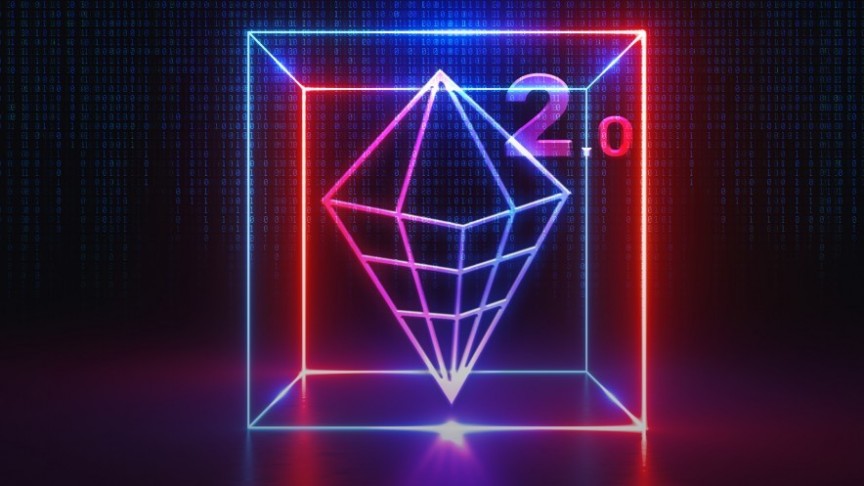 Ethereum is approaching a major upgrade: version 2.0. The upgrade's first testnet has just gone live―and now, even more progress is on the way.

Since its creation in 2014, Ethereum has become one of the most popular blockchains. It was the first blockchain that allowed developers to program smart contracts and decentralized applications, and it also boasts the second largest cryptocurrency by market cap. Now, Ethereum developers are reinventing the platform: this month, Ethereum 2.0’s first testnet was released, allowing the public to see the upgrade in action for the first time.

What Ethereum 2.0 Has To Offer

Ethereum 2.0 will introduce several improvements. Above all else, version 2.0 will be more efficient and scalable than Ethereum is today. This is thanks to a technology called "sharding," which will allow Ethereum to allocate transactions to parallel sub-chains. Combined with Plasma chains, this will enable Ethereum to handle a high volume of transactions―10,000 times more than it can currently handle, according to Ethereum creator Vitalik Buterin.

There will be one other big change: Ethereum 2.0 will introduce Casper, a new proof-of-stake mechanism. Right now, users can only mine Ethereum, and they must dedicate large amounts of computer power to do so. Mining is system-intensive and not always profitable, but with the introduction of Casper, almost everyone will be able to stake. This means that you can participate in consensus and earn revenue, even if you own a low-end system.

These improvements will have compounding benefits. As ConsenSys has explained, the introduction of a new sharded blockchain has allowed Ethereum to reduce the minimum staking amount from 1000 ETH to 32 ETH. As staking becomes more affordable, a greater number of users will be able to participate in staking―and as more participants join in, Ethereum 2.0 will become more decentralized, resilient, and secure.

What’s on the Testnet?

Currently, Ethereum 2.0 is in its early stages. However, the project has reached a major milestone: in early May, Prysmatic Labs announced the launch of a “phase 0” testnet that acts as a beacon chain. This means that it provides the foundation for all future development of Ethereum 2.0. And even though the testnet doesn’t do very much at the moment, it has introduced some very important features.

Right now, the testnet is primarily focused on staking. You can already obtain testnet ETH from a faucet and stake those tokens on the testnet. These tokens don’t have any market value, but the system is being used to initiate and organize Ethereum 2.0’s future participants. By staking ETH, you can act as a block validator and see what it is like to provide a critical part of the Ethereum 2.0 network.

In other words, the testnet is a first glimpse at what Ethereum 2.0 will eventually become. As Prysmatic Labs has noted, the testnet is “publicly accessible and NOT a simulation.” It is a live network that is largely being supported by real users and network participants. Previous proof-of-concept demos operated in isolation, but this new testnet provides a real, interconnected preview of Ethereum 2.0.

What To Expect In the Future

There are two more very important steps that are set to follow phase 0. Phase 1 will introduce shard chains, which, as noted above, will improve scalability and efficiency by allowing Ethereum to handle transactions in parallel. However, phase 1 will only provide the structure that underlies sharding. It is not until phase 2 that sharding will be functional and appropriate for handling transactions.

Phase 2 will also reintroduce accounts, smart contracts, and other features that programmers can use to develop blockchain-based DApps. Justin Drake, a prominent Ethereum developer, has predicted that phase 1 will be activated in 2020, and that phase 2 will be activated in 2021. Of course, programmers will be able to continue developing applications on the original Ethereum blockchain in the meantime.

When Will Ethereum 2.0 Be Launched?

Nobody knows exactly when Ethereum 2.0 will see a complete launch. Developers and team members have been hinting at prospective release dates since last summer, but these dates are subject to change. General consensus suggests that Ethereum 2.0 will be launched within the next two years. However, Ryan Selkis of Messari has made a more pessimistic prediction: he believes Ethereum 2.0 won't be completed before the end of 2021.

Although some are concerned that Ethereum 2.0 could face delays, there is plenty of reason to be optimistic. Vitalik Buterin has recently indicated that Ethereum 2.0's development trajectory is still on track and that the project's progress has not been delayed "by a single day." In April, Buterin stated that several different groups, including Prysmatic Labs and the Ethereum 2.0 research team, are “working right on schedule.”

Ethereum 2.0's progress does not need to be rushed—Ethereum 1.0 still exists, after all—but the project will face more competition as time goes on. Some blockchains, like Zilliqa, have already introduced sharding, while countless others have already implemented proof-of-stake. Meanwhile, CasperLabs is creating a blockchain that will compete directly with Ethereum. All of these projects will present Ethereum with considerable competition during the coming years.