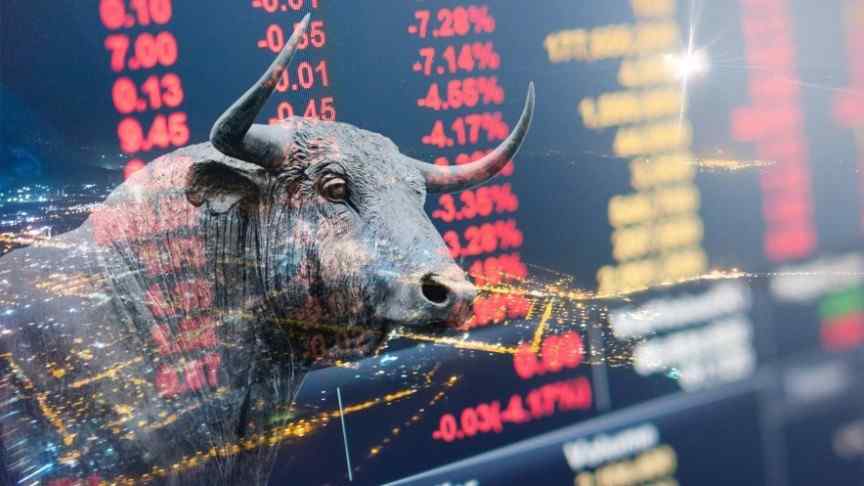 Bitcoin and the cryptocurrency market have paused after the midweek sell-off. Investors are looking to November 5th for fireworks. 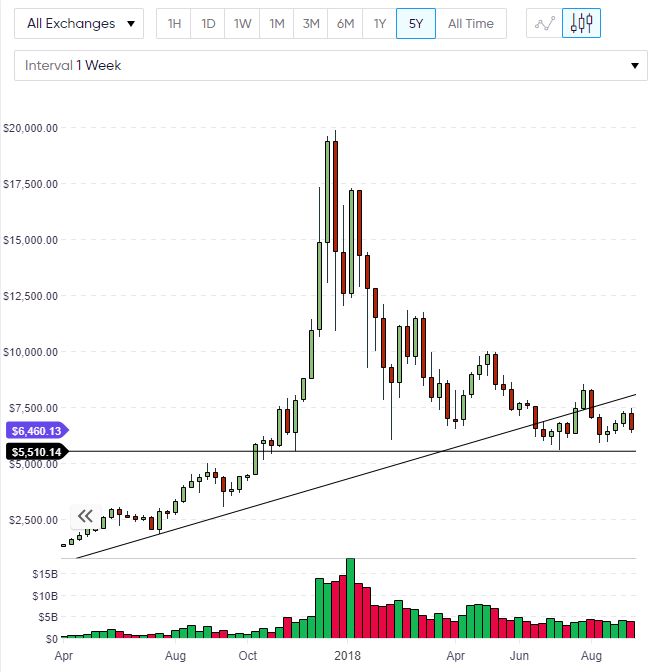 The price of Bitcoin is holding under the $6,500 level and if we don’t rally by the end of the week then it’s likely that the losses will continue into another week. On the weekly chart, Bitcoin is setting up a bearish engulfing bar and we see the $6,000 level as support, with another support level at $5,510 if we see a move lower. The key resistance level for a move higher is still the $8,500 level and this now aligns with the uptrend line.

Looking down the line for Bitcoin, there are hopes that November 5th will provide some bullish catalyst through the launch of an Exchange Traded Fund on the Bakkt exchange by the Intercontinental Exchange (ICE). The Bakkt exchange was a startup created by ICE and supported by Microsoft and Starbucks.

Forbes highlighted the key goal of Bakkt in a recent article stating,

The founding imperative for Bakkt will be to make Bitcoin a sound and secure offering for key constituents that now mostly shun it—the world’s big financial institutions. The goal is to clear the way for major money managers to offer Bitcoin mutual funds, pension funds, and ETFs, as highly regulated, mainstream investments.

The CEO of Bakkt also told Forbes that ICE had been building the infrastructure for the project in the strictest secrecy over a 14 month period, so it’s likely that they have covered the bases which have been the downfall of recent ETF rejections by the SEC.

So, once again the potential for institutional money arriving in the cryptocurrency market still exists and we are simply waiting for the door to be opened. If the Bakkt exchange opens that door in early-November then the bearish price action we are currently seeing would be irrelevant and a new flood of volume would create the opportunity for BTC to hold onto its rallies.

November 5th is known as Fireworks Night in the UK; named after a plot to blow up the Houses of Parliament in 1605. Bitcoin bulls will be hoping to see some fireworks in the cryptocurrency market around that date.

EOS is another coin that has struggled on the week and created another bearish engulfing bar. I was hopeful that last week’s rally from support would be the start of another push higher in EOS but we are now aiming at the key $5.00 level, which was the low in April before we saw the all-time highs around $22.50. EOS needs to hold this support level again and a close above $7.00 would repair any damage and create a double bottom opportunity. 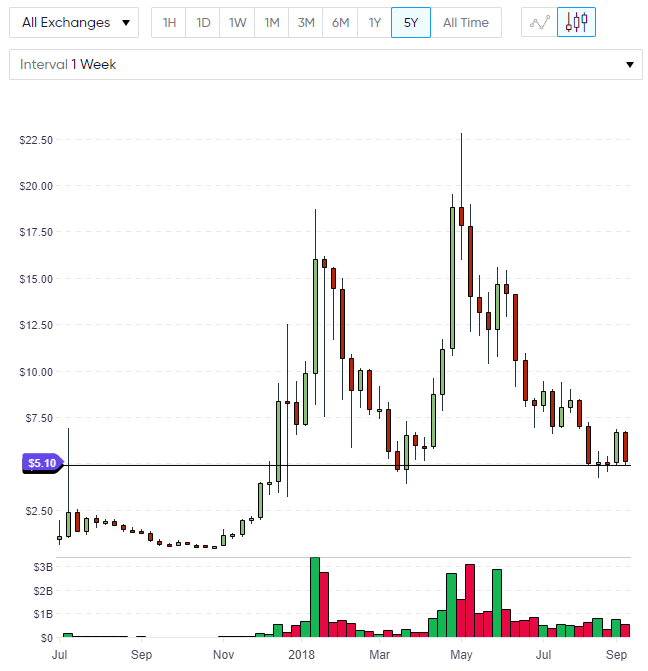 The EOS development team are hoping to attract new users by reducing the cost of opening accounts. EOS New York, which is one of the network’s largest and most powerful block producers, announced that 15 producers had approved a new update to reduce the cost of a new account from 4 kibibytes (KiB) to 3 KiB ($1.84 approx). Accounts are needed to transfer tokens or launch transactions and reducing the cost “dramatically reduces the barriers to development”, the announcement stated.

Ripple announced the departure of its top legal officer on Friday. Brynly Llyr had been at Ripple for over two years and although no reason was given for the departure, it may be related to Ripple’s upcoming lawsuits regarding XRP’s status as a security or a token. A number of investors have sued the project recently, blaming Ripple for much of the coin’s price decline, which led to Ripple strengthening its legal team, including the hire of a former SEC chairperson to help defend against the accusations. 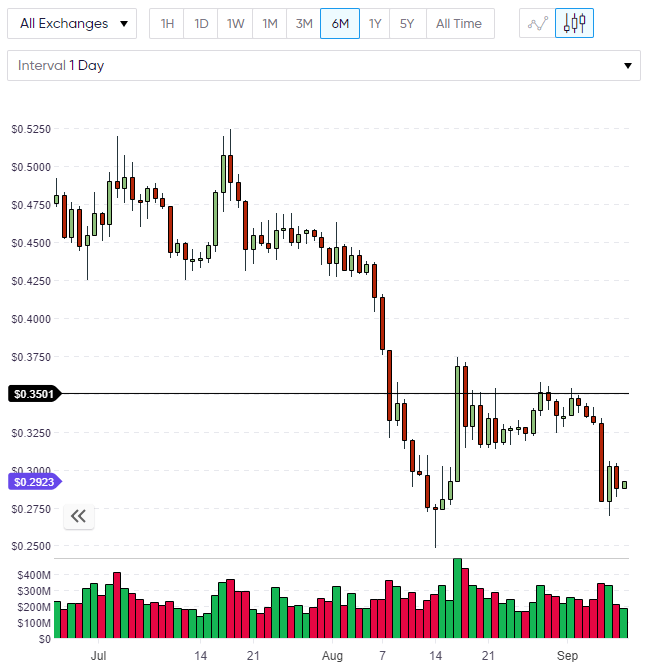 The price of XRP has paused after Wednesday’s sell-off and the price action is very similar to what we saw in ETH previously where we see a failure to take the resistance level at $0.35 and lower highs developing, which led to the decline in price. XRP is now trading at $0.29 and the $0.35 level is the obvious resistance for further upside.

The support levels for XRP are the August lows around $0.248, with a larger support level at $0.20. XRP managed to hold an uptrend line from 2017 in August, so if the price can hold these August lows, it’s possible that a double bottom will develop and XRP can mount another move to the upside and a possible long-term low. If Ripple sees a positive resolution to the lawsuits, we may see a rally develop once again in XRP.