Bitcoin Mining Part 1: Decentralization, Nationalism and the Future of Blockchain 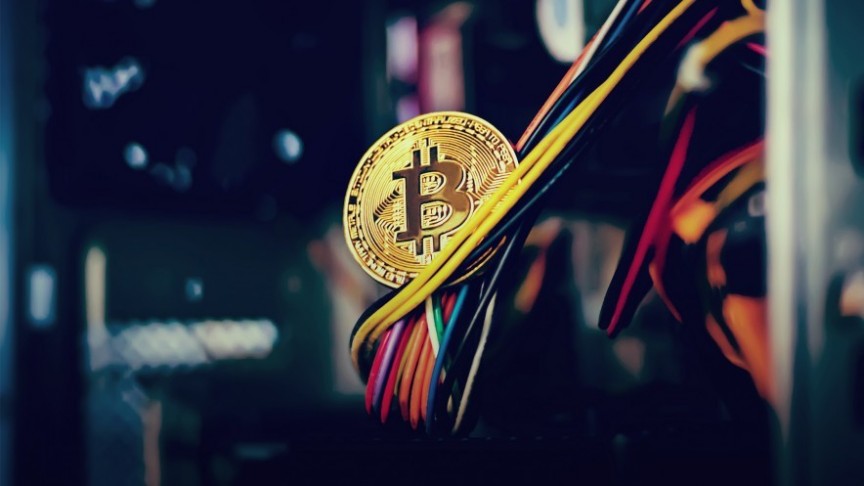 Bitcoin Mining Part 1: Decentralization, Nationalism and the Future of Blockchain

This is the first part of a 2-part series that examines the threat of Bitcoin centralization brought on by mining giant Bitmain and its aggressive expansion into North America. In part 2, we interview two leading mining firms, namely American-based TMGcore and Canadian-based Bitfarms, who talk about Bitmain's activities in the area and provide insight into their own technology and mining activities. Bitmain's response on the issues pertaining to it, if given, will also be included in the second part. Coming soon!

At the core of the Bitcoin blockchain rests a revolutionary concept: Decentralization. This single concept defines Bitcoin and sets Bitcoin apart from the fiat currencies of the world. Decentralization is the underpinning on which the entire Bitcoin blockchain rests, and it is the reason why Bitcoin was created in the first place — to offer an alternative to the centralized authorities that run our current global monetary system.

Today, this concept is challenged by the unchecked growth of Bitcoin mining-giants such as Bitmain, a Chinese-owned mining/manufacturing firm, who continue to generate absurd amounts of profit, and who continue to monopolize the Bitcoin network in the pursuit of industry domination.

Bitcoin mining, once a freely available segment of the Bitcoin ecosystem, is now reserved almost exclusively for companies who have access to massive amounts of cheap electricity and millions of dollars worth of mining equipment. As China-based Bitmain grows dangerously close to controlling over 50% of the network’s “hashing power”, other industry players are beginning to see the writing on the wall. Not only does Bitmain control the lion’s share of the hashing power, they also manufacture the bulk of the mining equipment. This means that should Bitmain fail to provide their services to the network, whether through nefarious actions, succumbing to government regulation, hostile takeovers or simple miscalculations, the entire Bitcoin ecosystem would feel the effects, and the efficiency of the network could be compromised.

This risk is only compounded by the fact that Bitmain’s main competitors are also China-based, meaning that if the Chinese government decides to bring the hammer down on Bitcoin mining, or worse, assumes control of these private enterprises, the Bitcoin network could become a pawn in the hands of a central government, erasing the core concept of decentralization from the Bitcoin network.

Mining is essentially the use of computer hardware to voluntarily verify transactions on the Bitcoin network. Computers are tasked with “solving blocks” through the use of a proof-of-work (PoW) algorithm. Put simply, computers guess the answer to a very complex computational equation (you can learn more about Bitcoin mining here). The first computer(s) to solve the block are awarded a predetermined amount of Bitcoin for their service to the network, and miners are also entitled to a share of the transaction fees of the network, incentivizing their efforts. As more miners enter the network, these equations become more difficult, and the mining rewards decrease, in an attempt to curb inflation and keep the block creation rate at a static time interval (about 10 minutes).

When Bitcoin was first introduced, Bitcoin mining was easily accessible, and users could opt to mine BTC with their PC’s, helping the network to grow. These users represented a diverse collection of Bitcoin enthusiasts who saw their efforts as a core service to the Bitcoin network, and they ultimately mined Bitcoin because they believed in the technology.

When the Bitcoin network was in its infancy, these equations were relatively simple, and there was very little competition on the network. As Bitcoin grew in popularity (and value), a surge of miners brought on a necessary increase in the difficulty of the Bitcoin hashing algorithm, which eventually pushed average miners out of the mining industry, as it was no longer profitable for them to attempt to solve blocks with inadequate hardware.

Instead of marking decentralization as their core ethos, today’s Bitcoin “miners” — large multi-million dollar corporations — seem to mark pure profit as their ultimate goal. After all, there is now big money in Bitcoin mining, and the larger the share a company can control with regard to hashing power the larger their potential share of the total mining profits available.

While the Bitcoin mining industry isn’t definitively controlled by one person, or one company, there are certain implications that indicate the industry is leaning toward centralization. The factors that help determine who has the most control over the Bitcoin network can be placed into three categories:

Today, Bitcoin mining equipment exclusively uses Application-Specific Integrated Circuit chips (ASIC chips). ASICs are chips designed to serve a single purpose, and in the case of Bitcoin mining equipment, they are designed to rapidly solve the mathematical equations needed to verify transactions on the Bitcoin network. While there are multiple producers of these chips, one manufacturer is head-and-shoulders above the rest.

Bitmain is by far the largest producer of mining Bitcoin technology, producing an estimated 70% to 80% of the total market share. The company is extremely prolific in the Bitcoin mining industry, reportedly earning somewhere between $3 billion and $4 billion dollars during 2017 alone.

While Bitmain’s share of the manufacturing of Bitcoin mining hardware is not complete, it does represent a large enough percentage to consider this portion of the industry “centralized”. If Bitmain were to produce a miner or a supporting software that had an inherent hardware fault or security issue, it could spell disaster for the Bitcoin mining industry and the Bitcoin network as a whole. This potential vulnerability opens the Bitcoin network to a “point-of-failure", something that a truly decentralized network should not be susceptible to.

As an entity such as Bitmain approaches a 50% share of the Bitcoin hashing power, the network becomes vulnerable to attack. It is important to keep in mind that these attacks are not necessarily in the financial interest of Bitmain, or anyone else for that matter. If Bitmain were to control even 80% of the hashing power, they would likely make more money by “playing fair” and just reaping the rewards they earn through legitimate mining practices rather than attempting to overthrow the network, double spend or purposely refuse to provide mining services.

But, having any single entity control over half of the hashing power does open the doors to severe attacks, and if someone with nefarious intentions were to somehow get control over the majority holder of hashing power, they could wreak havoc on the network. Additionally, having this sort of centralization take place within the Bitcoin network undermines the very function of Bitcoin, which is designed to provide a decentralized alternative to today's monetary system.

Which Government Regulates the Most Prolific Miners: Geo Centralization

Perhaps the biggest risk that could come to Bitcoin from mining centralization is the geo-centralization of the nodes responsible for providing services to the network. With Bitmain's share squarely under the regulatory thumb of the Chinese government, along with a large additional portion belonging to other Chinese-based mining pools, it is fair to assume that Chinese regulations could impact the Bitcoin ecosystem if there was to be a sudden regulatory pressure put on miners in China. This scenario is more likely than a random attack, as China has been quick to pressure cryptocurrency markets in the past. Additionally, as Bitcoin grows in popularity, we could see many powerful nations, such as China, attempt to shut the project down to protect their own central bank-issued currencies. The best defense against this type of regulatory pressure is a well-diversified network, something geo-centralization completely compromises. 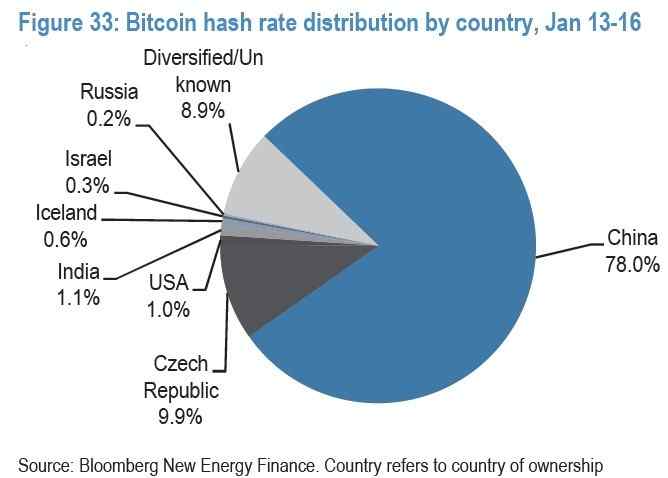 Bitmain was an early adopter of Bitcoin mining on an industrial scale, and their stronghold on the mining industry reflects an aggressive growth strategy. It's true that the company has received subsidies from the Chinese government in the form of cheap electricity in the past, which has greatly helped the company to grow, but the largest contributing factor to Bitmain's success remains their early entry into the mining-game and a rapidly growing crypto-market.

Bitmain is now trying to diversify and expand their operations into North America, a market that does not offer the benefits of Chinese sponsorship. In early 2018, Reuters reported on Bitmain's intention to expand into the Canadian province of Quebec thanks to its mild climate and cheap hydro-electricity. Recently, Bitmain has also expanded into the United States, opening offices in Silicon Valley, Arizona, and Washington, with future plans of expanding into Texas as well.

Members of the North American mining community have been publicly critical of Bitmain. Citing unfair advantages, deceitful collusion with regulators and an ethos incoherent with the foundational concept of decentralization. These concerned voices are calling for a sober analysis of the impending monopolization of the Bitcoin mining industry. While it is easy to disregard these concerns, Bitmain does have a track record of purposely deceiving its customers, its investors and blockchain development communities.

Earlier in 2018, Bitmain's “profits-over-philosophy” approach to cryptocurrency mining led to privacy-coin Monero choosing to hard fork their project. Bitmain had designed an ASIC miner to be used with the Monero mining algorithm, effectively creating an unbalanced mining ecosystem for the coin. What's more, even after the Monero project decided to render these new miners obsolete through a change in their algorithm, Bitmain still attempted to sell the miners to unsuspecting customers who were unaware of the machine's uselessness.

Even more recently, reports of Bitmain's dishonest business tactics have been popping up in the headlines. The company is now being accused of lying about the involvement of different companies who were reported as investors in Bitmain's pre-IPO funding round. Notable firms, however, are now publicly denying their involvement with Bitmain, further fueling the speculation among members of the crypto-community who continue to doubt Bitmain's ethics.

Bitmain's stronghold on the mining-industry is clearly a cause for concern on many fronts, potentially compromising the security of the Bitcoin network, and threatening the chance for an evenly distributed mining ecosystem. To help us better understand the issues facing the Bitcoin mining industry and the concerns surrounding Bitmain's continued growth, Bitrates followed up with American and Canadian industry leaders who offered insight into the situation in North America, as well as a glimpse at their own contributions to the Bitcoin ecosystem.

In Part 2 of our series, representatives from TMGcore, a Texas-based mining operation with an exciting and innovative development team, and Bitfarms, a Quebec-based mining operation with a healthy amount of support from their local market, have agreed to answer some of the most burning questions about the Bitcoin mining ecosystem, centralization and government regulation.