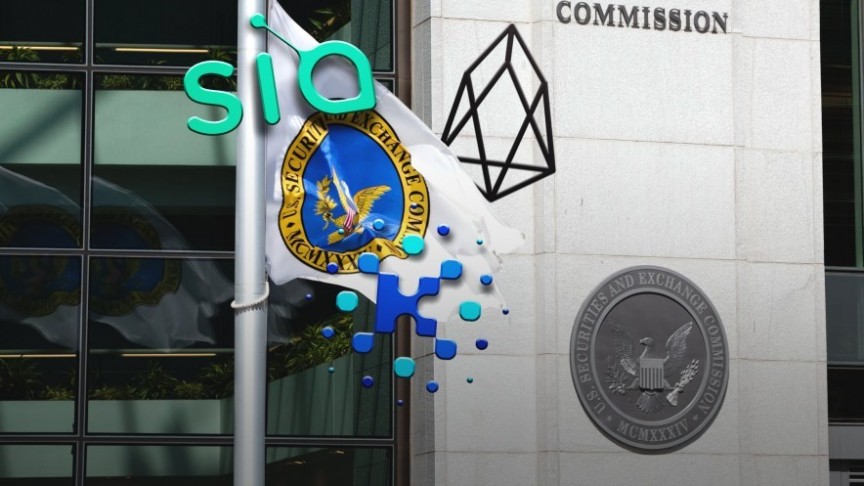 The SEC has fined EOS and Sia under securities law, and it is locked in an ongoing legal battle with Kin. What does this mean for cryptocurrency?

The U.S. Securities and Exchange Commission is one of the biggest forces in crypto regulation. Since late 2017, it has considered most token sales and ICOs to be securities offerings. Although the SEC primarily cracked down on fraud at first, it has also gone after legitimate ICOs that have failed to register with the Commission.

However, the SEC's control of crypto began slowly: it wasn't until December that it took serious measures and fined two ICOs over registration violations rather than fraud. The SEC also began to scrutinize Kin at the time, and it is continuing to issue penalties: EOS and Sia have just been fined, and there may be more to come.

On September 30th, EOS's parent company, Block.one, settled with the SEC and paid a one-time fine of $24 million for its failure to register as a security. For EOS, this is almost nothing: the blockchain's initial token sale raised $4 billion. Plus, EOS has not been forced to admit to a securities status, and it faces no other penalties.

This case is important because EOS is the 7th largest cryptocurrency and the most successful coin that the SEC has targeted. Major coins like Ripple and Tezos have faced class action securities lawsuits before, but they haven't yet been targeted by the SEC. If that does happen, it's not clear if they will be let off as easily as EOS.

Some suggest that EOS's case shouldn't be generalized to other coins. Stephen Palley of TheBlock has argued that EOS got off lightly because it made efforts to exclude U.S. investors, and because it cooperated with the SEC's negotiations. As such, the SEC's leniency toward EOS seems to be unrelated to its established reputation.

Sia also settled with the SEC this month. On October 1st, its parent company, Nebulous, agreed to penalties of about $225,000. This fine is noticeably smaller than EOS's settlement, which is appropriate, as Sia is a smaller project. Sia is the 64th largest coin by market cap, and it only raised $120,000 during its first token sale.

Though Sia owes more than it initially raised, it probably won't be hurt by the fine too much. In April 2018, Sia raised $1.5 million in a second sale, which was fully compliant with securities regulations. Sia also raised $3.5 million in venture capital this year, and its sister company, Obelisk, earns revenue from Sia-specific mining hardware.

Like EOS, Sia made an effort to cooperate with the SEC, and it has not been forced to register as a security. Zach Herbert, CEO of Nebulous, has stated that the team was "pleased at how [Sia] fared under regulatory scrutiny," adding that the SEC "asserted no claims" about Sia itself. It seems that the settlement was fairly painless.

Kin Still Won't Back Down

Kin, meanwhile, is not going down without a fight. Despite its early efforts to work with the SEC, Kin began to face accusations from the SEC at the end of 2018. Kin publicly denounced the SEC in January, arguing that its overreach threatens dozens of blockchain projects. Finally, in June, the SEC filed litigation, and Kin began its dispute.

Kin's legal saga hasn't concluded, but new developments have emerged. Kin CEO Ted Livingston has announced that the company will shut down its chat app, Kik, and lay off most of its team. Livingston says this is necessary to "get through the SEC trial with the resources we have." Kin will now focus on "converting Kin users to Kin buyers."

Kin's future is unclear. Its token sale raised $125 million, which gives some sense of scale, but no indication of what its resistance will cost it. Kin also appears to be struggling: since January, its market cap ranking dropped from #150 to #400. However, if Kin wins, it could set a precedent and make token sales far less restrictive.

What Will Happen Next?

Without a doubt, more fines and settlements are on the way, but the SEC may refine its approach. On September 24th, the U.S. Congress and the SEC met to discuss Libra and crypto regulation. Though current regulations are harsh, key figures such as SEC Commissioner Hester Peirce continually express openness toward cryptocurrency.

Meanwhile, new crypto startups may become more careful about which projects they imitate. Coinbase and other industry members have just launched the Crypto Rating Council to assess which coins are potential securities. According to the site, Polymath, Ripple, and Maker (MKR, but not DAI) are especially likely to be considered securities.

This doesn't mean much for the typical investor. Most of those coins are currently available on retail exchanges, just like Bitcoin, Ethereum, and other major coins. The real risk is that new projects might be stifled by regulations, and that old projects might be targeted for enforcement. Simply put, token sales are in a tough spot.