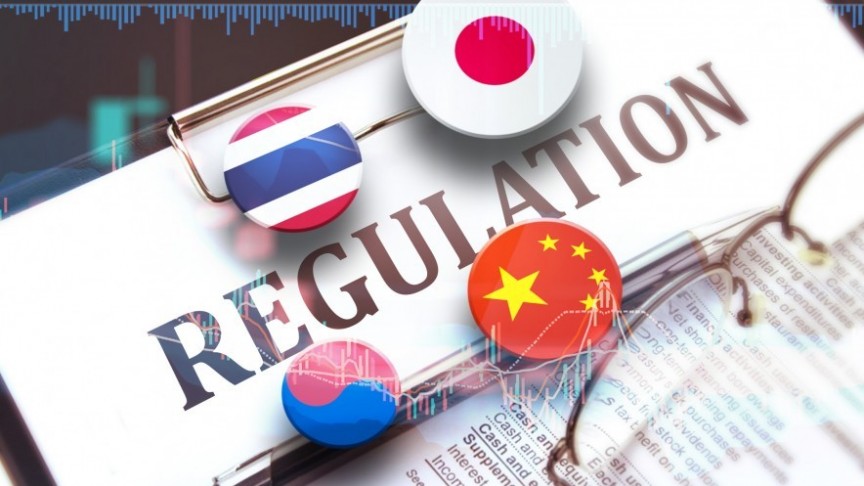 A detailed look at how Asian countries have handled the sensitive and controversial topic of cryptocurrency regulation.

With blockchain and cryptocurrencies quickly gaining popularity over the past few years, regulatory bodies around the world have increasingly expressed the need for a solid legal framework. Given the complex nature of the technology, however, it comes across as no surprise that governments are split over the legality of the industry and how much control it should be allowed over the existing economy.

There is perhaps no greater example of this divide than the continent of Asia. Even though the region is home to some of the most progressive countries in terms of cryptocurrency adoption, not all governments are equally thrilled to embrace the industry. Nevertheless, the blockchain ecosystem continues to thrive in almost all of those countries, especially now that retail consumers and investors have got a taste for the market.

The following is a look at how Asian countries have handled the debate of cryptocurrency regulation and legalization.

In January 2018, the South Korean Ministry of Justice prematurely announced that a cryptocurrency ban was imminent and could make trading either very difficult or impossible. Following the major public backlash, however, the government released a statement reaffirming the public that the market would not be banned entirely. In June, it announced a new regulatory framework aimed at making the industry safer and more legitimate.

With cryptocurrency exchanges in the country suffering from numerous security breaches, including ones that compromised user identities, the Financial Services Commission has tightened regulation on them specifically. Furthermore, the watchdog now requires exchanges to conduct Customer and Enhanced Due Diligence on new and existing users. This will not only prevent foreigners and criminals from using local cryptocurrency exchanges but will also keep track of suspicious activity.

Finally, the regulator has also asked exchanges to be more stringent with their KYC/AML checks. This is in line with the government’s intention to recognize and regulate cryptocurrency exchanges similar to banks and other registered financial institutions.

Despite Thailand not being responsible for as much trade volume as some of its neighboring countries, its government has taken a rather accelerated approach to regulating the industry. On May 14, it released the Digital Asset Business Decree that made the Thai SEC responsible for offering investor protection through new laws.

Registered companies dealing with the cryptocurrency industry in any form will also have to apply for licenses under the new regulation.

All market participants, including ICO issuers, digital exchanges, brokers and dealers involved with digital asset transactions, are required to register with the SEC within 90 days of the effective date. The participants must also receive the Finance Ministry’s approval to conduct digital asset business.

One of the earliest adopters of cryptocurrency, Japan was also among the first to legalize cryptocurrency usage and trading. In April of 2017, the government announced that Bitcoin and other digital currencies would be accepted as legal tender.

Like South Korea though, Japanese cryptocurrency exchanges are also known for being hacked and breached into. While the first major instance involved the infamous Mt. Gox scandal of 2014, regulators decided to intervene after another exchange Coincheck lost $534 million worth of investor holdings in January 2018.

Since then, the Japanese Financial Services Agency announced a strict set of security guidelines for exchanges to follow, failing which they would no longer be able to operate. They now also need to apply for a cryptocurrency business license, the approval of which is contingent to a thorough security audit of the company. Finally, the FSA blacklisted privacy coins such as Monero to prevent money laundering and other illegal financial trades.

In September 2017, the Chinese government announced a blanket ban on initial coin offerings and cryptocurrency-based investment schemes. A few days later, it also pressurized digital currency exchanges operating in the country to cease operations immediately. Since then, Chinese citizens have had no easy way to invest in the market.

At one point in time, China used to account for close to 50 percent of the global cryptocurrency trading volume. Today, however, the Chinese Yen is used for less than one percent of all Bitcoin trades in the world. Most cryptocurrency companies were forced to move outside China to continue operations, while a few that could not relocate had to close down.

While the country continues to be a leader in terms of cryptocurrency mining, this may not last very long if rumors are to be believed. A report claimed the People’s Bank of China recommended mining operations be subject to heavy restrictions on energy consumption, land use, tax collection and environmental regulations. The only reason that cryptocurrency mining is popular in the region is due to the abundance of cheap electricity and direct access to specialized hardware.

What Does the Future Hold?

The sheer size of the Asian cryptocurrency market can likely be attributed to early adoption by local investors. At one point in late 2017, the Wall Street Journal reported that it alone was responsible for around 80 percent of the global trading volume. Consequently, consumers and businesses from the region are also the among the worst affected by scams and predatory behavior. With billions of dollars on the line, however, governments have since stepped in to create a better economic environment.