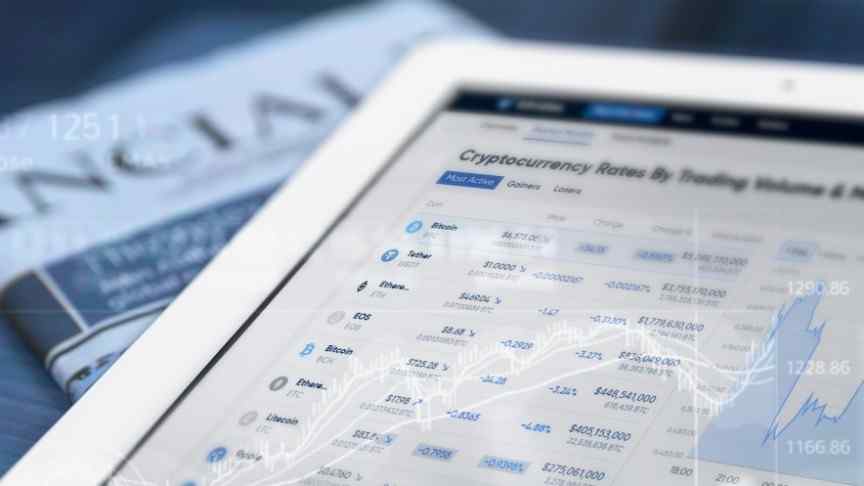 Bitcoin and other cryptos were hit by massive selloffs, said to have been triggered by a massive whale short position set up a few days ago.

Wednesday September 5, 2018, saw a massive selloff in Bitcoin and several other cryptocurrencies. This selloff occurred without Bitcoin attaining what was expected to be the generally held resistance levels on the weekly chart at $7,500. According to sources, the selloff was not unconnected to rumors circulating to the effect that Goldman Sachs had decided against setting up its earlier planned cryptocurrency trading desk. CCN also reported that there was a massive short position that was set up a few days earlier before the Goldman Sachs rumor.

Whatever it was, it pulled off the intended effect and hit Bitcoin very hard indeed. It is now trading at the $6,300 mark as at the time of writing, representing a massive $1,000 drop in less than 24 hours. Other cryptos such as Bitcoin Cash, Ether, Litecoin and Ripple are also taking massive hits.

So what is the outlook for the Bitcoin prices as well as those of other cryptos as we prepare for the end of the week?

Technically speaking, there is no surprise here. BTC/USD chart continues to respect the identified upper and lower boundaries of price action as is seen on the weekly long term chart shown below. Traders who have followed our trade calls in the last 6 weeks should not have had any problems tracking the price movements as it oscillates from lows of $5,800 to highs of slightly above $7300. So it is simply on its way back down to the support levels, and it still has downside momentum.

With the price moves seen during Wednesday’s day and overnight trading, price moves are decidedly heading downwards to attack the previous lows at $5,800. 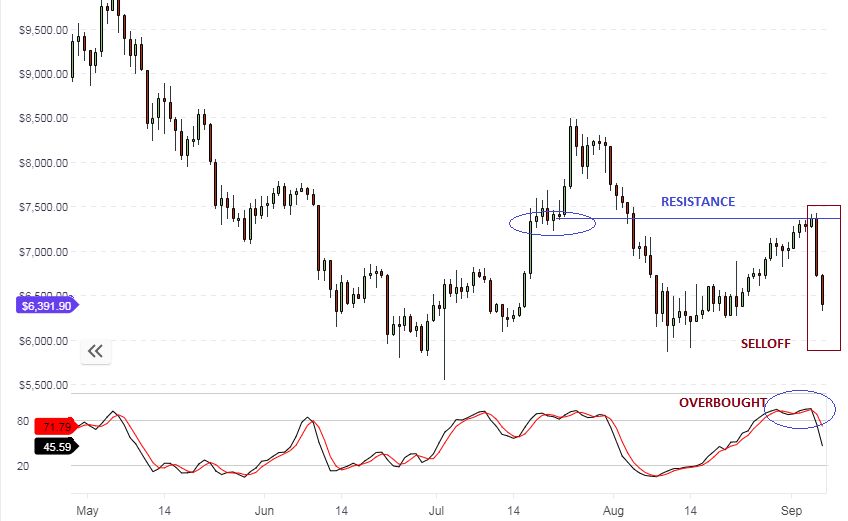 The daily chart shows the selloff very clearly. It can be seen that the price had already attained pre-identified resistance levels, and the Stochastics oscillator was already in overbought territory. These were glaring sell signals. There is still further room for downside movement. It is likely that prices will stall briefly at $6,300 (a calm before a storm), before resuming further downside movement. 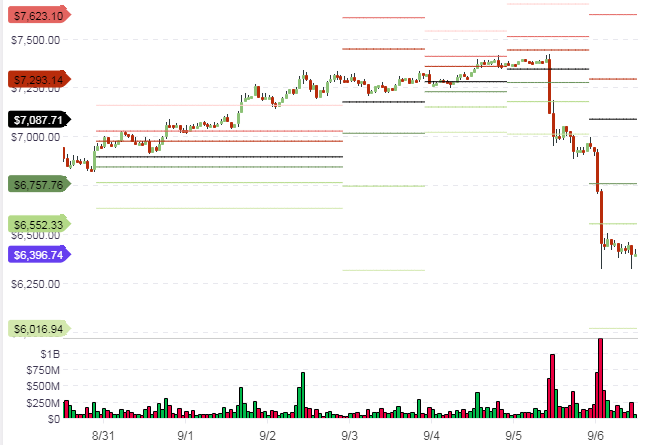 Intraday traders should understand that the sentiment is now bearish through and through. Therefore, the intraday trade setups should focus on selling on any rallies to pivot points above price action. Price has already broken violently below the S2 pivot point. Therefore, day traders can aim to sell at any brief pullbacks to the $6,400 - $6,500 levels. However, prices may not even experience such pullbacks and may just keep storming downwards.

ETH/USD seems to have been the hardest hit of the top cryptocurrencies, especially on the back of comments by several crypto enthusiasts, notably Jeremy Rubin. It also reminds us of a Twitter statement made by Ethereum founder Vitalik Buterin on February 17, 2018, where he mentioned that cryptocurrencies are still a new and hyper-volatile asset class, and could drop to near-zero at any time. 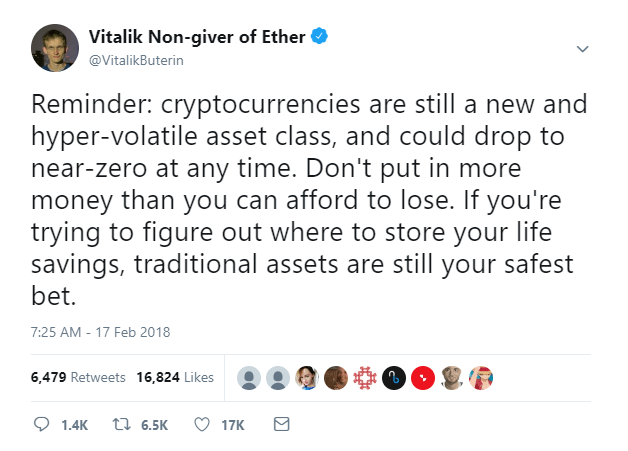 The Ethereum asset seems to have become a victim of its own success. While the network is expected to thrive, the outlook for the asset according to Rubin and several other crypto enthusiasts does not seem promising, as its use may basically be watered down to simply being used to pay gas prices for transactions on the network.

ETH/USD is trading at $225, down nearly a fifth of its Tuesday value. Price is once more testing key support levels at close to $220. If the selloff in the market continues, it could put this support area in great jeopardy and could cause it to break. The rest of the week will provide a clearer picture on what happens on the long term chart. 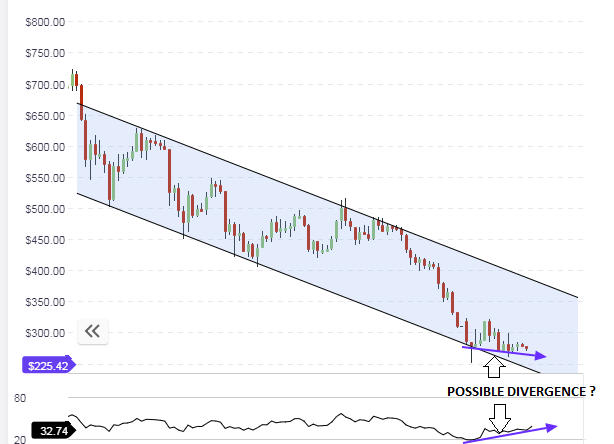 The medium term chart shows that ETH/USD is basically testing the support levels of the downward channel. However, the RSI has begun to trend upwards, producing what looks like a divergence. This is however not indicative of an upside correction just yet, as market sentiment is still very bearish. We also see that there is still space for further downside to the lower channel line, and this may be the outcome to watch for as we head into the weekend.

The hourly chart shows that price had hit as low as $210 (price level at S2 pivot), before forming a pinbar which pushed prices back up to $225; a price just below the S1 pivot. With the market sentiment decidedly bearish, day trades should focus on trading off pivot point resistance areas. If the S1 pivot holds firm, then we could see further downside on the day from this level.

Bitcoin Cash was not left out of the blood-letting that occurred on Wednesday, with prices going even as low as $486 before recovering slightly to its present levels of $503. However, the picture on the medium term daily chart does not give cause for much cheer for those who are bullish on Bitcoin Cash.

We can see from the charts that the bearish pennant which had evolved over the last two weeks, has been successfully broken to the downside. This will open the door for further bearish moves as we head towards the weekend.

The picture on the hourly chart shows that the price action is currently pulling back up to the S1 support line. We may see price action trading between S1 and S2, or between the central pivot and S1. Either, the trader should look for opportunities to sell on the rallies, in line with the bearish sentiment in the market.