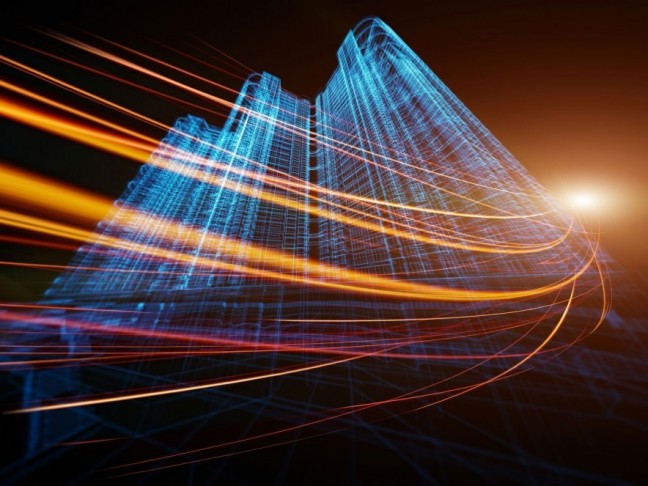 Bitcoin is holding support at $10,000 as Bakkt announces a launch date for physical futures. Ethereum is also supported ahead of the PoS upgrade.

Next month will see the long-anticipated arrival of Bakkt’s physically delivered Bitcoin futures contracts. The digital asset company, which is owned by the owner of the New York Stock exchange, has set the date of September 23rd for the release.

The emergence of Bakkt’s product is big news for the cryptocurrency world as it finally brings institutional-grade security to the sector. Bakkt’s statement underlined this point in their press release:

…digital asset markets are global and well-developed, but they have largely been designed to serve retail customers rather than institutional participants. Bakkt is bridging that gap…

The Bakkt futures contract also incorporates a warehouse element where physical storage and settlement of futures contracts will be executed- which is the standard for traditional commodities such as gold or oil. The physical settlement option will have the same cyber and physical security protections that support the likes of the NYSE and this is a key moment in bringing professional investors to an arena that was built for retail investors. Institutional investors have held back from investing heavily due to fears over regulations and potential hacking.

We can expect to see volumes increasing in Bitcoin when the contract goes live and this will be the foundation for more contracts to be listed and physically settled.

With the Bakkt launch date only one month away, Bitcoin is still holding the $10,000 level. The price has found good support just above the $9,000 level and this could be a platform for further gains. Bakkt had previously been “onboarding” clients and that process will continue ahead of the launch so it’s possible that we see significant volume arrive at the end of September. If we do see gains in the next week or two they would likely see the market trading near the $12-13,000 level again and if institutional arrival, combined with risk events then it’s possible that the market could push higher towards the previous record high near $20,000.

The latest example that all is not well in the economy is a news report that sees the German government preparing a stimulus plan for the country’s slowing economy as a contingency for a recession. With central bankers in panic mode to slash rates and increase stimulus, it is wise to hold some assets outside of the banking system, which is why gold, silver, and Bitcoin have been rallying of late. 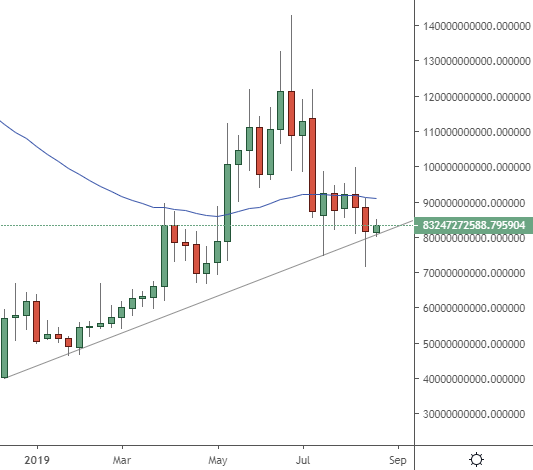 The chart for the total cryptocurrency market without Bitcoin has found some support at the rising trendline and this will be an important crossroads for the market. Will we see buyers emerge to preserve the uptrend? Or will another sell-off increase Bitcoin’s dominance in line with the arrival of institutional players to the number one digital currency?

Similar to the price action in BTC, ETH has been finding support just below a key number, with the $200 level being the pivot here. ETH is one of the better performers on Monday with a gain of 4%.

With the arrival of physical futures trading in BTC, the market will be looking for the next listing and ETH is still the number two coin by market cap so would be the likely candidate. Another positive for the coin is the upcoming Ethereum 2.0 upgrade, which is a move to a Proof of Stake (PoS) model and is aimed at increasing the speed and scalability of Ethereum. A detailed description of the coming upgrade by another Bitrates writer is available here.

If ETH can hold the $200 level and see a decent rally on the week then it will set the stage for a retest of the recent highs. The market got above $350 at the start of July before the recent wave of profit-taking took the steam out of the market.

The price of LINK has been finding support just above the $2.00 mark and is up 6% for the week, with another push higher possible in the coming weeks. The price currently trades around $2.50 and the project has a market cap of $890 million, which puts the coin at number 15 in the rankings.

Chainlink is a smart contract blockchain that works with the Swift bank payment system and also with large corporations such as Google and Oracle. The Chainlink blog provides some insight into the smart contract market, stating that,

Smart contracts are on track to become the dominant form of digital agreement that will power the global economy’s financial markets, insurance industries, global trade (trade finance), and many other agreements that heavily rely on the reliability of a contract.

The rally high in LINK was $3.75 so this will be an initial target for any further gains. There are currently 350 million coins in circulation from a total pool of 1 billion. The Tron cryptocurrency sits at number 14 in the list of coins with an additional market cap of £300 million compared to LINK.

For the overall market, we should focus on the market support and it’s likely that further gains will be seen this week. This is setting the stage for an increase in institutional volumes in late-September, whilst the economic woes and market risks abound for the financial system.