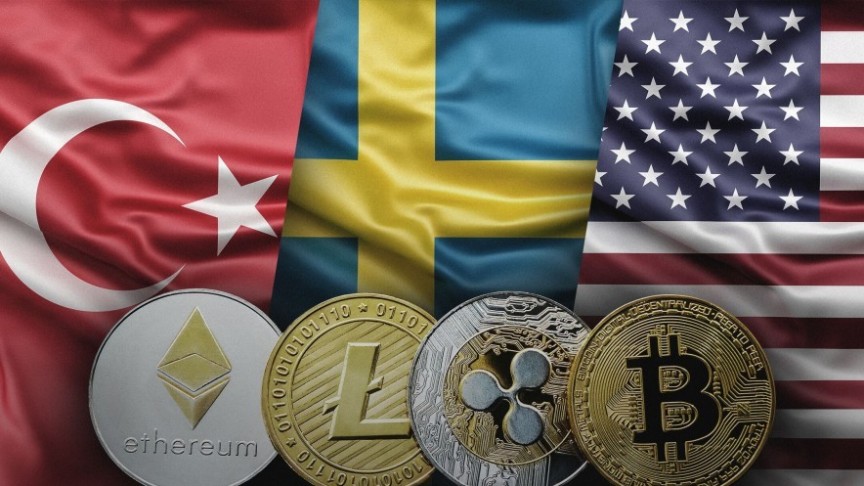 Sweden, Turkey, and the U.S. have detailed their positions on a national digital currency. Here's what each country has to say.

It's been a busy year for state-backed digital currencies. In early November, China indicated that it plans to push forward with its plans for a yuan-backed cryptocurrency. Prior to this, a leaked document from the Bank of Canada revealed that the institution has examined the possibility of a Canadian digital currency―at least briefly.

And that's just the beginning: since 2018, Japan, Venezuela, Iran, Brazil, and the Marshall Islands have all started to approach the possibility of a national digital currency. In fact, at least 19 different countries around the world have made an initial attempt to do the same, according to a February report from HackerNoon.

Now, there are three more countries to add to the list. Sweden, Turkey, and the United States have all made recent announcements about their position on national digital currencies. Not every country is accelerating toward cryptocurrency at full speed, but the future looks positive. Here's what progress the three countries have made.

On November 22nd, Stefan Ingves of Sweden's Riksbank outlined requirements for a national digital currency. He noted that such a currency must be able to handle large, retail, and international payments in real-time. Ingves added that legal tender must be redefined to include digital currency, while banknotes must serve as a backup.

Ingves also emphasized that an identity system is essential. "To make this work in a digital world, it's absolutely crucial ... to have government-sponsored digital identity." Ingves added that, without an identity system, it is impossible to operate a centralized monetary system or implement KYC/AML procedures.

This is not the first time that Sweden has looked into the matter. Riksbank began to plan its digital currency, currently called "e-krona," in 2016. However, it's not clear whether e-krona will be a cryptocurrency: although early rumors suggested IOTA and Stellar were involved, more recent news implies a departure from crypto.

Elsewhere, Turkey is moving forward with its own plans for a digital lira. On November 4, Resmi Gazete indicated that the first trials of the coin will occur by the end of 2020. Turkey's digital currency is just one part of the country's plans for economic recovery―more broadly, Turkey plans to establish a stronger financial sector.

Like Sweden, Turkey has been considering a national digital currency for some time. Those plans began in February 2018, and this July, Turkey confirmed its plans in a five-year roadmap. The roadmap specifically mentions a "blockchain-based central bank digital currency," meaning that the coin will indeed be a cryptocurrency.

Turkey is a prime target for cryptocurrency because of its ongoing financial crisis. The lira has suffered from inflation in recent years, leading to a 2018 spike in crypto trading thanks to crypto's status as a relatively stable investment. However, it remains to be seen whether a state-backed digital currency will have the same appeal.

The U.S. Federal Reserve Says No to Digital USD

The U.S. Federal Reserve has been exploring digital currency as well. "While we are not currently developing a central bank digital currency, we have assessed and we continue to carefully analyze the costs and benefits of pursuing such an initiative in the U.S.," Chairman Jerome Powell wrote in a letter dated November 19.

Powell went on to note that countries outside of the U.S. have compelling reasons to issue a digital currency―especially if consumers are turning away from cash. Powell argued that this is not the case in the U.S. He describes the demand for cash in the U.S. as "robust" and calls the existing payments industry "highly competitive."

Powell's letter is a response to questions from two Congress members, who suggested that the U.S. dollar's primacy may be at risk from international digital currencies. They added that private sector stablecoins from Facebook, JP Morgan, and Wells Fargo could pose a risk, and urged the Reserve to maintain its jurisdiction over finance.

Do National Digital Currencies Have a Future?

However, national digital currencies also offer surveillance capabilities, allowing governments to enforce laws and prevent tax evasion. Given that many people already use non-private banking solutions, surveillance is not always controversial, but it is an issue for those who have turned to cryptocurrency for privacy.

From a practical stance, most national digital currency projects are making slow progress, and only a few countries have successfully issued a digital currency to date. On top of this, some digital currencies do not rely on cryptocurrency or blockchain, so it is hard to say to whether the worlds of national finance and crypto will truly collide.